Space Foundation's website home...
The most spectacular repair call in the history of mankind will be honored by the Space Foundation with the 2010 Space Achievement Award at the 26th National Space Symposium next month at The Broadmoor Hotel in Colorado Springs, Colorado. The historic Hubble Space Telescope Repair Mission, conducted by the crew of STS-125 aboard the Space Shuttle Atlantis, installed a new camera and spectrograph; replaced two 460-pound battery packs that keep the telescope running when its solar arrays are facing away from the sun; replaced one of Hubble's three Fine Guidance Sensors, which guide the telescope as it focuses on its targets; replaced some of Hubble's thermal insulation; and attached a docking ring so that a robotic spacecraft can eventually retrieve it from orbit. 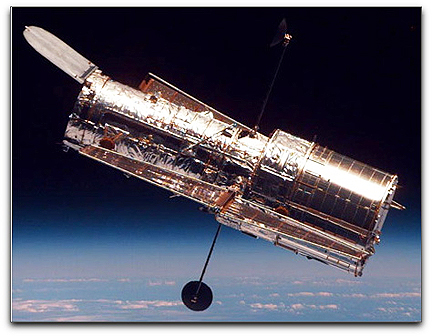 The Hubble Space Telescope...
The 11-day repair mission included five grueling spacewalks, totaling 37 hours, in which the astronaut-mechanics, wearing bulky gloves and spacesuits, completed exceptionally complex repairs. The result is advanced technology that improves the telescope's discovery power by up to 70 times beyond what was available when the Hubble Space Telescope was originally put in orbit and an extended operational lifespan until at least 2014. With the newly installed Wide Field Camera, Hubble can observe in ultraviolet and infrared spectrums as well as visible light, peer deep in space in search of the earliest star systems, and study planets in the solar system. The telescope's new Cosmic Origins Spectrograph allows it to study the structure of the universe, including the star-driven chemical evolution that produces carbon and the other elements necessary for life. The Hubble Space Telescope Repair Mission was a cooperative effort of NASA Goddard Space Flight Center, the STS-125 crew, Ball Aerospace & Technologies Corp., ATK, Lockheed Martin, and the Space Telescope Science Institute.