[SatNews] NASA has selected Space Exploration Technologies Corporation (SpaceX) of Hawthorne, California, to start negotiations on a lease to use and operate historic Launch Complex (LC) 39A at the agency's Kennedy Space Center in Florida. 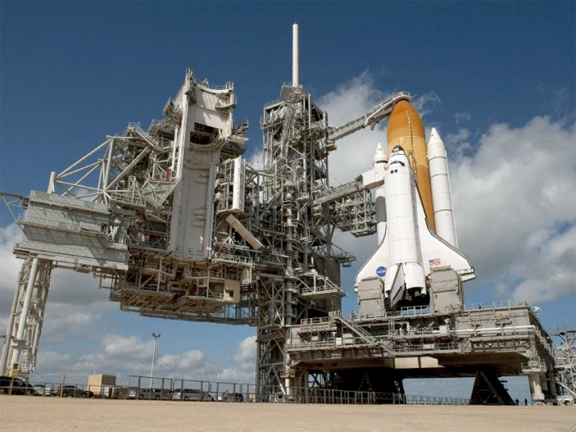 Launch Pad 39A served as the starting point for many NASA missions, including the space shuttle Endeavour, ready on the launch pad Feb. 6, 2010, just days before its launch from Kennedy Space Center in Cape Canaveral, Florida.
Image Credit: NASA/Bill Ingalls

Permitting use and operation of this valuable national asset by a private-sector, commercial space partner will ensure its continued viability and allow for its continued use in support of U.S. space activities. The reuse of LC-39A is part of NASA’s work to transform the Kennedy Space Center into a 21st century launch complex capable of supporting both government and commercial users. Kennedy is having success attracting significant private sector interest in its unique facilities. The center is hard at work assembling NASA’s Orion spacecraft and preparing its infrastructure for the Space Launch System rocket, which will launch from LC-39B and take American astronauts into deep space, including to an asteroid and Mars.

NASA made the selection decision Thursday after the U.S. Government Accountability Office (GAO) denied a protest filed against the Agency by Blue Origin LLC on Sept. 13.  In its protest, Blue Origin raised concerns about the competitive process NASA was using to try to secure a potential commercial partner or partners to lease and use LC-39A.  Blue Origin had argued the language in the Announcement for Proposals (AFP) favored one proposed use of LC-39A over others. The GAO disagreed.

While the GAO protest was underway, NASA was prohibited from selecting a commercial partner for LC-39A from among the proposals submitted in response to the agency's AFP that had been issued on May 23.  However, while the GAO considered the protest, NASA continued evaluating the proposals in order to be prepared to make a selection when permitted to do so.  After the GAO rendered its decision Thursday in NASA’s favor, the agency completed its evaluation and selection process.

NASA notified all proposers on Friday of its selection decision concerning LC-39A.  Further details about NASA’s decision will be provided to each proposer when NASA furnishes the source selection statement to the proposers. In addition, NASA will offer each the opportunity to meet to discuss NASA’s findings related to the proposer’s individual proposal.  NASA will release the source selection statement to the public once each proposer has been consulted to ensure that any proprietary information has been appropriately redacted.

NASA will begin working with SpaceX to negotiate the terms of its lease for LC-39A. During those ongoing negotiations, NASA will not be able to discuss details of the pending lease agreement.

Since the late 1960s, Kennedy's launch pads 39 A and B have served as the starting point for America's most significant human spaceflight endeavors -- Apollo, Skylab, Apollo-Soyuz and all 135 space shuttle missions. LC-39A is the pad where Apollo 11 lifted off from on the first manned moon landing in 1969, as well as launching the first space shuttle mission in 1981 and the last in 2011.

For information about Kennedy's Launch Complex 39A and ongoing work to transform the center into a 21st century launch complex, visit; http://www.nasa.gov/kennedy

For information about NASA missions and programs, visit: http://www.nasa.gov