The National Nuclear Security Administration’s (NNSA) Red Storm supercomputer, located at its Sandia National Laboratories, helped the U.S. Navy shoot down an errant satellite in February 2008. NNSA’s role had been classified until this week. NNSA’s Red Storm supercomputer is used to help certify the reliability of the U.S. nuclear weapons stockpile without underground nuclear testing. For about two months, NNSA diverted Red Storm and its technical experts and codes to this secret project to simulate, assess, and plan the complex mission of shooting down the errant satellite. All of Red Storm's 26,569 processors were used to perform complex simulations that allowed NNSA’s technical experts to predict various details and possibilities. The work done at Sandia National Laboratories helped answer many questions, such as at what altitude to hit the satellite, how to hit it to minimize the spread of debris (including its hazardous fuel), and the best way to make sure that the satellite was destroyed with a single shot. This information contributed to the Presidential decision to proceed and helped the Department of Defense plan and execute the shoot down, as well as conduct analysis after the fact. The satellite in question failed shortly after its launch in 2006 and was reentering the Earth’s atmosphere. This was a potential safety hazard, due to the frozen hydrazine propellant that was on board. The U.S. Navy successfully shot down the satellite late on February 20, 2008 with a single missile. 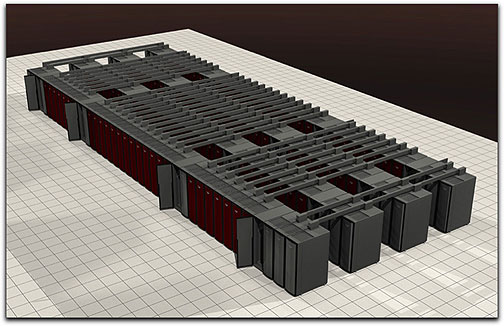 The machine has 96 processors in each computer cabinet, with four processors to a board. Each processor can have as many as 8 GB of memory sitting next to it. Four Cray SeaStars — powerful networking chips — sit on a daughter board atop each processor board. All SeaStars talk to each other. Messages encoded in MPI (the Message Passage Interface standard) move from processor to processor at a sustained speed of 4.5 GB per second, bidirectionally. The amount of time to get the first information bit from one processor to another is less than 5 microseconds across the system. The machine is arranged in four rows of cabinets. There are a total of 11,648 Opteron processors and a similar number of SeaStars. The SeaStar chip includes an 800 MHz DDR Hypertransport interface to its Opteron processor, a PowerPC core for handling message-passing chores, and a seven-port router (six external ports). SeaStars are linked together to make up the system¹s 3-D (X-Y-Z axis) mesh interconnect. IBM fabricated the SeaStar chips using 0.13-micron CMOS technology. Visualization will occur inside the computer itself — a capability unique to Red Storm among supercomputers.
Topical Tags :
Military
Regulatory/Government
Regional Tags :
North America