Teledyne e2v, a Teledyne Technologies [NYSE: TDY] company, has delivered all 12 flight deliverables consisting of three variants of the company's CCD314 image sensors for the Sentinel-5/UVNS instrument to be launched onboard the Second Generation MetOp (MetOp-SG) satellites. 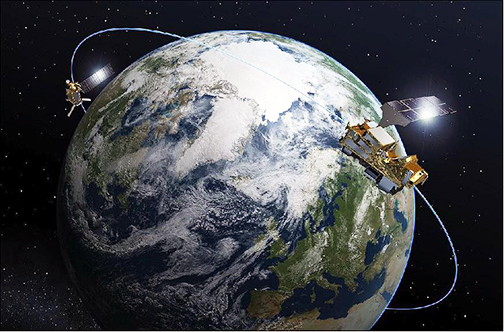 Artist's rendition of the MetOp-SG spacecraft on-orbit.
Image is courtesy of ESA.

A collaborative program between the ESA and EUMETSAT, the MetOp-SG program comprises of three flight sets of two low earth polar-orbiting satellites with complimentary payloads, MetOpSG-A and MetOpSG-B. Airbus Defence and Space is responsible for the MetOp-SG spacecraft and system.

The Sentinel-5/UVNS instrument onboard MetopSG-A is focused on global monitoring of key air quality trace gases and aerosols as a part of the Copernicus program. It will also contribute to operational meteorological observations from polar orbit and thus increase Europe's capability for long-term climate monitoring.

Teledyne e2v’s custom CCD image sensors are optimized for different wavelengths and are built around the company’s proprietary enhanced quantum efficiency backside thinning process. The image sensors include a graded anti-reflective coating unique to Teledyne e2v, and will sit at the heart of the Sentinel-5/UVNS instrument, a high-resolution spectrometer operating in the ultraviolet to near-infrared range.

Dave Morris, Principal Project Manager at Teledyne e2v said that the company is proud to have completed the manufacturing and delivery of all flight hardware to the Sentinel-5 program. The firm is confident the detectors will provide this collaborative effort between the EU and UK with advanced insights across all of the goals of this mission.

Dr. Didier Martin, Sentinel-5 Project Manager at the European Space Agency, noted that these CCDs are the first flight items to be integrated at the heart of the Sentinel-5 instrument. With their outstanding performances, ESA is confident the sensors will meet the mission’s goals of monitoring air quality and supporting climate modelling by measuring atmospheric trace gases such as Ozone, Nitrogen dioxide, Sulfuric dioxide and many others, on a daily basis with unprecedented accuracy and resolution.

Robert Greinacher, Sentinel 5 Project Manager at Airbus Space Systems, added that Sentinel-5 is one of the most important instruments on board the MetOp-SG spacecraft, providing precise weather and environmental monitoring for the sake of European citizens. The in-time delivery of the sensors by Teledyne e2v, together with their demonstrated performance, confirms the supplier selection by Airbus for this key technology on which Sentinel-5 is based. Further, these sensors are one key contributor to achieve an overall outstanding instrument performance.