At 4:31 p.m. EDT on Sunday, space shuttle Discovery completed maneuvering the shuttle-space station stack 180 degrees to the "undock attitude," placing Discovery in front of the space station as they travel through space.

Discovery and the station will stay in this orientation long enough for the natural drag to slow the stack by about a foot per second, estimated to take three hours. This will lower the orbit very slightly over time, enough to avoid a piece of orbital debris whose erratic orbit makes it a potential threat. The debris is estimated to be about four inches in diameter, part of a spent Chinese satellite upper stage. It is in a similar altitude as Discovery and the station, but in a 98 degree inclination, rather than 51.6 degrees. This would have allowed the debris to cross the shuttle-station orbit repeatedly for several days, and the maneuver eliminates that risk. Had this action not been taken, the first time of closest approach would have been about two hours into Monday's spacewalk.

On March 18th, the STS-119 crew also took the photo of the ISS's robotic Canadarm2 and S6 truss segment. The S6 truss segment was moved from Discovery’s cargo bay by the station’s Canadarm2, handed off to the shuttle’s remote manipulator system (RMS), and then handed back to the station’s robotic arm where it remained in an overnight parked position. Also visible in the image are the Columbus laboratory, starboard truss, and solar array panels. (Photo credit, NASA) 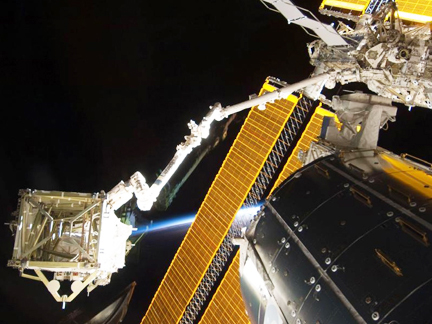