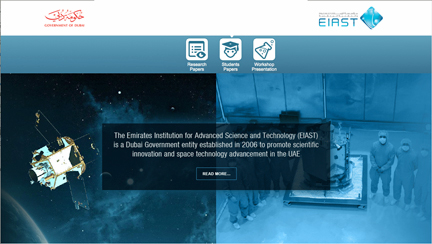 [SatNews] The Emirates Institution for Advanced Science and Technology (EIAST) revealed that ‘EIAST Super Resolution Tool’  developed by Saeed Al Mansoori, an Emirati engineer involved in EAIST’s center of application and analysis development project, has boosted and enhanced the resolution of satellite images, including those taken by DubaiSat-2— by 0.75 meters.

The innovative tool significantly improves the image details by increasing the number of pixels when zoomed in. This subsequently enhances the degree of contrast and highlights the edges and borders that represent infrastructures, roads, and buildings, among others.

H.E. Yousuf Al Shaibani, Director General, EIAST, said, “The ‘Super Resolution Tool’ provides a strategic dimension to EIAST’s numerous achievements which will further bolster the institute’s future successes in the fields of scientific research and technological innovation. This also falls in line with the directives of H.H. Sheikh Mohammed bin Rashid Al Maktoum, Vice President and Prime Minister of the UAE and Ruler of Dubai. We commend Eng. Saeed Al Mansoori for observing the highest level of professionalism and excellence while creating the tool. His success proves that EIAST’s efforts to train Emiratis are now bearing fruit. We show that we are capable of achieving a comprehensive scientific innovation, which is one of the basic pillars of the future."

For his part, Al Mansoori said his success was made possible because of the strong support received from the leadership to promote space industry in the emirate. He praised EIAST for encouraging technological creativity and scientific innovation among citizens as key to propelling Dubai into one of the most developed nations in the world. He added, “The development of the new tool was in response to the growing need of improving the quality of satellite images. Usually, these images have fixed resolutions, and it would be difficult to upgrade these once the satellites have already been launched into the outer space. The ‘Super Resolution Tool’ has saved us from the efforts of designing new complex parts just to improve the quality of the captured images. It has also reduced the costs of satellite production. Moreover, the tool is flexibility as it could also be modified to fit other applications such as radars, surveillance cameras, and various medical fields."

EIAST was established by the Dubai Government in 2006 to encourage scientific innovation and technological progress in Dubai and in the UAE. It also aims to develop the scientific skills and knowledge of Emiratis. It is mainly involved in outer space research and development; satellite manufacturing and systems development; space imaging; and ground station services and support for other satellites.