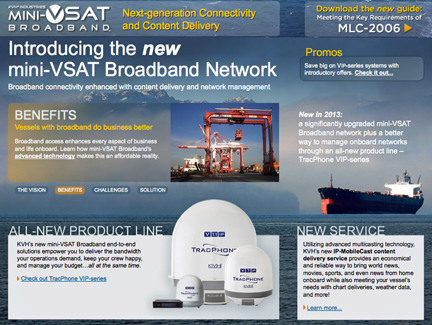 To date, KVH’s TracPhone V7 systems have been deployed on 105 USCG vessels across eight different classes of cutters, and KVH’s mini-VSAT Broadband service has provided 29.2 terabytes of data and more than 835,000 Voice over Internet Protocol (VoIP) minutes. The contract for hardware, airtime, and support was first announced in September 2010. KVH systems are now in use on cutters in all U.S. Coast Guard districts in the continental U.S., as well as overseas in the Persian Gulf, Guam, and Puerto Rico. A cutter is a USCG designation for any vessel over 65 feet in length, including coastal patrol boats, seagoing buoy tenders, and fast-response cutters.

This diverse range of platforms supports a variety of critical USCG operations including drug interdiction, maritime border security, anti-piracy tasks, search and rescue operations, and humanitarian efforts. The low latency of the KVH service is particularly important to the fast and efficient processing of biometric information from vessel to shore, a key to immigration and law enforcement activities. The 24/7 nature of USCG operations and the extreme sea and weather conditions in which these relatively small vessels operate are proof of the durability and reliability of the TracPhone V7 and mini-VSAT Broadband service.