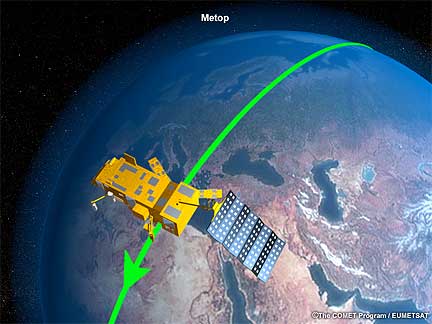 MetOp satellite, artistic rendition courtesy of EUMETSAT
[SatNews] The second of a total of three European climate and weather satellites from the MetOp series is ready for launch...

and is installed in the payload bay of a Russian Soyuz launch vehicle. Blast-off from Baikonur Spaceport in Kazakhstan is scheduled for the evening of September 17. RUAG Space played a key role in the development and construction of the satellite.

The MetOp (Meteorological Operational Satellite) series satellites orbit the Earth at a height of 800km, supplementing the Meteosat series satellites stationed 36,000km above the Earth. While the Meteosats deliver the "big picture" concerning weather patterns, in their lower orbit, MetOp satellites are able to carry out more localized, but significantly more accurate readings. The data they gather is particularly useful for mid- and long-range weather forecasting as well as for climate research. The MetOp satellites were commissioned by the European meteorological satellite operator EUMETSAT and the European Space Agency (ESA). RUAG Space delivered a range of components, including the satellites' bodies. Comparable to the chassis of a car, these bodies form the "backbone" of the satellites onto which all other components are mounted. 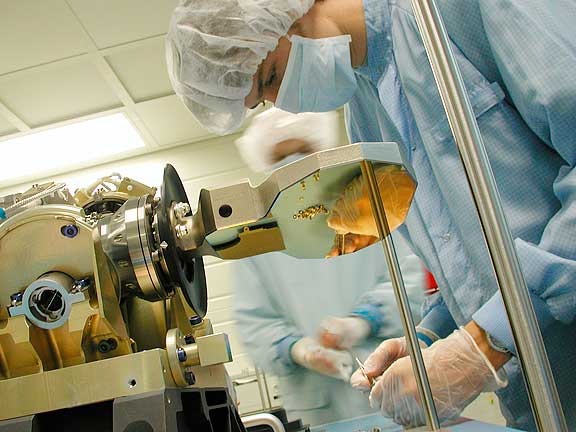 Integration of the IASI Scan Mechanisms for Metop at RUAG Space in Zurich.
Photo is courtesy of RUAG Space.
RUAG Space was responsible for supplying the GRAS (GPS Receiver for Atmospheric Sounding) instrument, which measures the atmospheric effect on signals from GPS navigation satellites. These measurements make it possible to determine temperatures in the upper troposphere and stratosphere. Another fundamental measuring device aboard METOP is IASI (Infrared Atmospheric Sounding Interferometer), a high-resolution infrared spectrometer that makes it possible to measure temperature and humidity as well as the chemical composition of the Earth's atmosphere at various heights with excellent resolution and accuracy. RUAG Space supplied the instrument's highly sensitive scan mechanism and its digital data processing system. Altogether, RUAG Space supplied electronic units for three of the instruments on board the MetOp satellites. The MetOp satellite's solar generator is controlled by an alignment mechanism supplied by RUAG and the thermal insulation, composed of up to 25 layers of metalized plastic film, is also manufactured by RUAG Space. This insulation protects the sensitive instruments on board from the harsh temperatures of space. Moreover, RUAG Space supplied the specialized testing and transportation equipment used primarily during the satellite's integration and testing phase.
Topical Tags :
New Products
Manufacturing
Agencies
Systems
Regional Tags :
Europe