Orientation Back To Normal For NASA's Dawn Spacecraft

[SatNews] NASA's Dawn spacecraft is healthy and stable, after experiencing an anomaly in the system that controls its orientation—Dawn is still in its second mapping orbit 2,700 miles (4,400 kilometers) above dwarf planet Ceres. 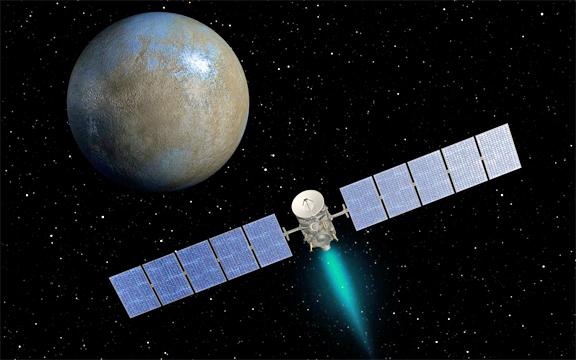 Artistic rendition of the Dawn spacecraft en route toward the dwarf planet Ceres.

Image is courtesy of NASA/JPL-Caltech.

On June 30, shortly after turning on its ion engine to begin the gradual spiral down to the next mapping orbit, the spacecraft's protective software detected the anomaly. Dawn responded as designed by stopping all activities (including thrusting), reconfiguring its systems to safe mode and transmitting a radio signal to request further instructions. On July 1 and 2, engineers made configuration changes needed to return the spacecraft to its normal operating mode. The spacecraft is out of safe mode, using the main antenna to communicate with Earth.

Dawn will remain at its current orbital altitude until the operations team has completed an analysis of what occurred and has updated the flight plan. Because of the versatility of Dawn's ion propulsion system and the flexibility of the mission's plan for exploring Ceres, there is no special "window" for starting or completing the spiral to the third mapping orbit. The plans for the third and fourth mapping orbits can be shifted to new dates without significant changes in objectives or productivity.

More information on the Dawn mission is online at: http://www.nasa.gov/dawn and at http://dawn.jpl.nasa.gov.