An MQ-9 Reaper dropped a 500-pound bomb against an anti-Iraqi target Aug. 16 in one of the first weapons engagements for the unmanned aircraft system. The Reaper began flying combat sorties in support of Operation Iraqi Freedom July 18th and joined the MQ-1 Predator as another UAS (unmanned aircraft system) patrolling the sky to protect coalition forces. During an overwatch mission over southeast Iraq, Reaper operators from the 46th Expeditionary Reconnaissance and Attack Squadron at Joint Base Balad discovered a suspicious vehicle. The Airmen immediately relayed the information to personnel in a local ground unit, said Lt. Col. Micah Morgan, the 46th ERAS commander. After the suspicious vehicle was confirmed to be a VBIED -- a variant of the No. 1 killer of Americans on the battlefield -- a joint terminal attack controller cleared the Reaper to employ a GBU-12 laser-guided weapon against the vehicle. "This was a great example of the Reaper's unique capabilities," Lt. Colonel Morgan, the commander of the 46th ERAS, said. "We searched for, found, fixed, targeted and destroyed a target with just one aircraft." 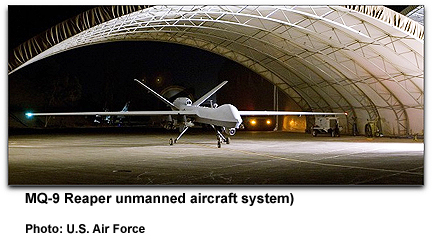