...Federal Information Processing Standards (FIPS) 140-2 Security Level 1 validation, a cryptographic hardware and software accreditation given by the National Institute of Standards and Technology (NIST). The HSCK is a common cryptographic engine employed by the Hughes HN9500 satellite terminal and the SPACEWAY 3 Access Gateway for secure communications.

Hughes SPACEWAY 3 Access Gateway, which manages uplinks to the satellite and Internet interconnection, employing a proprietary encoding protocol for the outbound channel received by all HN9500 satellite terminals. These terminals then communicate in a single hop back to the Access Gateway or to each other.

In order to expedite the FIPS 140-2 validation process, Hughes partnered with Corsec Security, Inc., a validation consulting firm with over 14 years of validation experience. 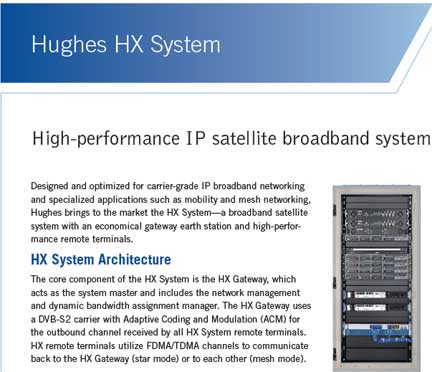 The Company has also been selected by Telconet to provide...

...an HX System and broadband satellite terminals for the Ministry of Telecommunication and Information Society (Mintel) rural connectivity project in Ecuador. Tomislav Topic, president of Telconet, said, “We conducted a thorough evaluation of competing satellite broadband system providers and were convinced that Hughes not only had the best technology for this program, but also the depth of experience and the ability to deliver in a timely fashion. We are excited about this network connecting rural and underserved areas in Ecuador, bringing to these isolated communities, Internet access, data, voice, and video applications for the first time.”

Telconet purchased an HX System hub and HX50 and HX200 terminals, and installation of the network has been completed.