[SatNews] The Italian COSMO-SkyMed constellation is now fully operational and complete with the arrival of the system’s fourth satellite in its final orbit position. 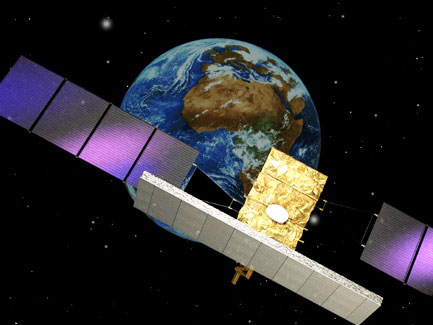 COSMO Sky-Med satellite, artistic rendition
The satellite was launched on November 5th from Vandenberg AFB in California and came fully on-stream with the transmission of the first images to the ground stations. COSMO-SkyMed is a dual-use program employing technology that is among the most advanced in the world to provide data to institutions, defence organizations and private companies. The system was created under the auspices of the Italian Ministry of Education, Universities and Research, with financing and technical and operational co-ordination provided by the Italian Space Agency and co-financing from the Italian Ministry of Defence.

The early orbit operations for the fourth COSMO-SkyMed satellite were once again successfully managed by the LEOP (Launch and Early Orbit Phase) team at Telespazio's Fucino Space Centre, while the first radar images from COSMO-SkyMed 4 were acquired normally by the Matera Space Centre and are now available. The constellation, which is the jewel in the crown of the Italian Space Agency’s programs, is now better able than ever to carry out continuous and accurate Earth observation over time, with parameters that ensure reliability, stability and continuity, relayed at intervals of a matter of hours, covering all changes, movements and variations to and on the land. Constant monitoring of this kind has never been achieved before. The COSMO-SkyMed system has therefore reached its optimal capacity for acquiring images – around 1,800 a day – day and night in all weather conditions. This makes the Italian system among the most reliable and advanced in the world.

The system was built by Thales Alenia Space (a Thales/Finmeccanica joint venture) in its role as prime contractor with responsibility for the entire programme, including both the space and ground segments. Telespazio, a Finmeccanica/Thales company, built the system’s entire ground segment and the integrated logistics and operations segment. The Fucino Space Centre houses the control centre for the constellation, which manages the satellite acquisition phases after launch and subsequent early orbit phases, as well as command and control activities and the planning of requests for the acquisition of images. The Italian Space Agency’s Matera Space Centre is responsible for acquiring, processing and distributing the data sent back from the COSMO-SkyMed satellites for civil applications, representing a bona fide database of satellite images. e-GEOS, a joint venture between the Italian Space Agency (20 percent) and Telespazio (80 percent), manages the services of the Matera Space Centre on behalf of the Italian Space Agency and markets COSMO-SkyMed data and products around the world.