[SatNews] The Company has announced the tracking of both data and pilot channels of Galileo's.... 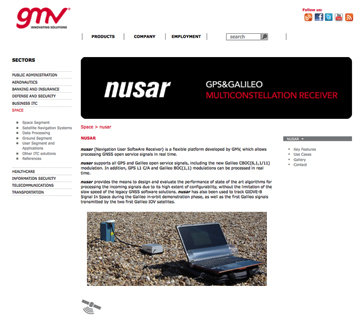 GMV nusar infopage
....first satellite signal with its own line of GNSS receiver products. The first two Galileo satellites were launched from Kourou Spaceport in French Guiana on October 21st and are now engaged in orbit-testing. The Galileo PRN 11 started transmitting the first navigation signal last Saturday. GMV has been involved in GNSS for the last 25 years. The GMV’s GNSS team includes more than 120 highly specialized engineers, some having more than 15 years experience in the GNSS field. GMV plays a critical role in the ongoing development of Europe’s GNSS strategy, and is a key partner in the EGNOS and Galileo programs.

GMV has developed its own GNSS software receiver products: SRX-10 on GPS, which has been optimized for the urban environment, NUSAR for GPS L1 and Galileo E1 and its own L1 front end. This experience has been applied, even previously to the development of the receivers, to many studies on receiver performances under very diverse signal conditions and designs, namely by processing the GIOVE satellites signal. Supported by its line of GNSS receiver products, GMV now presents its results on the first Galileo signals on both data (E1-B) and pilot (E1-C) channels of the Galileo PRN 11 satellite.