On this occasion, GMV flew their PATENDER (Net Parametric Characterization Parabolic Test) experiment with the goal of demonstrating the launch of nets and capture of satellites in zero-gravity conditions similar to outer space. PATENDER is an ESA-funded activity within the Clean Space program, which aims to encourage the development of space-debris reduction projects, using custom-built technology to capture decommissioned satellites still orbiting the earth. 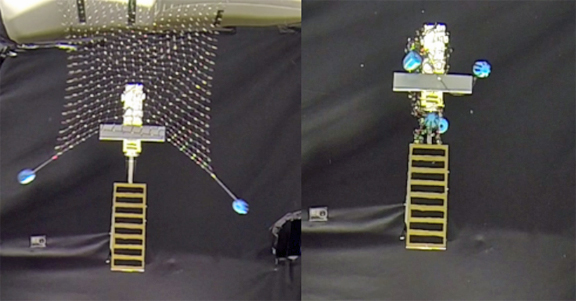 Space is becoming a highly saturated environment, especially in certain zones. A considerable halo of space debris is now building up in Earth orbit. Many objects reenter the Earth’s atmosphere every day but few are big enough to land before breaking up completely. Nonetheless, over 17,000 objects larger than a coffee cup have been recorded, all of which might hit operational satellites with catastrophic consequences.

Within space-debris capture techniques, GMV has been studying nets as one of the most promising non-rigid methods. The project is based on the development of a software simulator that recreates the net deployment dynamic and contact with the target satellite. This simulator has been vetted by means of a real parabolic-flight experiment, filmed with high speed cameras that enable a 3D reconstruction of the trajectories of the net itself and each of its nodes/knots.

This GMV-led multidisciplinary activity is being carried out within a consortium formed by the Polytechnic University of Milan, in charge of mathematical net models and 3-D reconstruction, and the Asturian Foundation PRODINTEC, responsible for manufacturing the pneumatic-electric net-launching system. GMV’s remit is to develop the software simulator and coordinate all project phases, from project acceptance and commissioning to validation of the final results.

The system, developed over one year, was taken in early June to Novespace, at the Bordeaux-Mérignac airport (France), to conduct low-gravity tests by means of a parabolic flight aboard an Airbus A-310. Net launch trials were carried out using a mock-up of ESA’s earth-observation satellite, ENVISAT.

The A-310 parabolic flight operations of Novespace involved the execution of 31 parabolas, achieving about 22 zero-gravity seconds per parabola. The first trial parabola showed that all experiment components were firmly anchored, so a start was then made on launching the first and second set of nets, gradually upping the launch pressure until hitting the satellite mock-up. Throughout the whole flight the nets were successively launched in each of the parabolas performed, obtaining over 15 deployments and a 100% capture rate.

After completion of the experiment ESA declared its satisfaction with the results, in the sure knowledge that they will help to mature non-rigid, net-based space-debris capture technology. The next step will be the orbit trial of a complete net totally representative of a space net aboard an atmospheric rocket (to obtain a longer zero-gravity time).