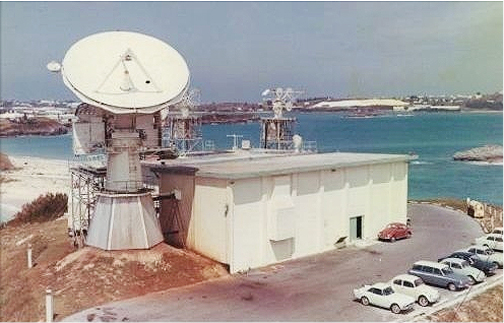 The NASA tracking station on Cooper’s Island pictured during its heyday (above). The facility performed a crucial tracking role for space missions that lifted off from Florida’s Cape Canaveral. The facility was abandoned in the late 1990s and buildings and infrastructure have now been cleared away to allow the land to be turned into a nature reserve. Now the station has a new "lease" on life.
[SatNews] NASA and the government of Bermuda have signed an agreement...

...to establish a temporary mobile tracking station on Cooper's Island to support launches from the agency's Wallops Flight Facility in Virginia, including future commercial missions. Deputy Premier and Transport Minister Derrick Burgess and NASA Deputy Administrator Lori Garver signed the agreement. The mobile tracking station will be provided and operated by Wallops under NASA's Research Range Services Program. The station can provide telemetry, meteorological, optical, and command and control services. It will support the launch of commercial rockets carrying supplies to the International Space Station or satellites to low-Earth orbit. Bermuda has been a long-time partner of NASA in supporting space exploration. The British territory hosted a radar tracking station from the Mercury Project in the early 1960s through most of the Space Shuttle Program.