The capacity on ASTRA’s future replacement fleet at the 28.2 degrees East neighborhood will be used by GlobeCast to serve its wide range of television and radio clients seeking to address the U.K. and Ireland. With its fleet of ASTRA satellites co-positioned at the orbital slot 28.2 degrees East and an attractive neighborhood at that slot, SES served more than 12 million satellite households in the U.K. and Ireland at year-end 2011, according to the annual SES Satellite Monitor. The detailed reach figures will be published by SES on March 27, 2012. 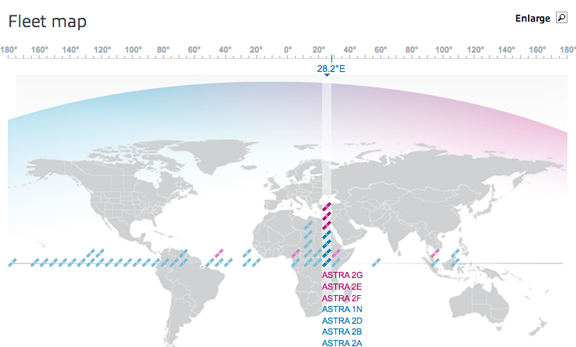 Ferdinand Kayser, Chief Commercial Officer of SES, said, “GlobeCast’s access to customers and our global and flexible satellite fleet are ideal components for the long-standing partnership between SES and GlobeCast in the broadcasting business. GlobeCast already markets SES capacity from multiple orbital positions around the globe, serving a wide range of geographic markets including Continental Europe, Sub-Saharan Africa, Latin America and the United States. We are pleased to further develop and enlarge this cooperation.” SES company information link.