NASA's return to the moon will get a boost in June with the launch of two satellites that will return a wealth of data about Earth's nearest neighbor. 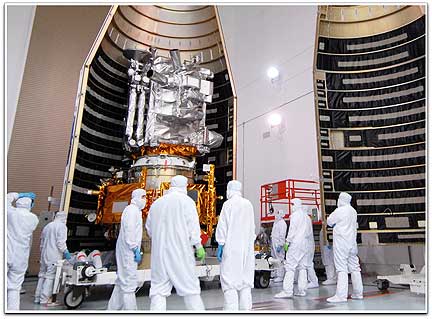 The agency has outlined the upcoming missions of the Lunar Reconnaissance Orbiter, or LRO, and the Lunar Crater Observation and Sensing Satellite, or LCROSS. The spacecraft will launch together June 17th aboard an Atlas V rocket from Cape Canaveral Air Force Station in Florida. Using a suite of seven instruments, LRO will help identify safe landing sites for future human explorers, locate potential resources, characterize the radiation environment and test new technology. LCROSS will seek a definitive answer about the presence of water ice at the lunar poles. LCROSS will use the spent second stage Atlas Centaur rocket in an unprecedented way that will culminate with two spectacular impacts on the moon's surface.

LRO's instruments will help scientists compile high resolution, three-dimensional maps of the lunar surface and also survey it in the far ultraviolet spectrum. The satellite's instruments will help explain how the lunar radiation environment may affect humans and measure radiation absorption with a plastic that is like human tissue. LRO's instruments also will allow scientists to explore the moon's deepest craters, look beneath its surface for clues to the location of water ice, and identify and explore both permanently lit and permanently shadowed regions. High resolution imagery from its camera will help identify landing sites and characterize the moon's topography and composition. A miniaturized radar will image the poles and test the system's communications capabilities.

While most Centaurs complete their work after boosting payloads out of Earth's orbit, the LCROSS Centaur will journey with the spacecraft for four months and be guided to an impact in a permanently shadowed crater at one of the moon's poles. The resulting debris plume is expected to rise more than six miles. It presents a dynamic observation target for LCROSS as well as a network of ground-based telescopes, LRO, and possibly the Hubble Space Telescope. Observers will search for evidence of water ice by examining the plume in direct sunlight. LCROSS also will increase knowledge of the mineralogical makeup of some of the remote polar craters that sunlight never reaches. The satellite represents a new generation of fast development, cost capped missions that use flight proven hardware and off the shelf software to achieve focused mission goals. LRO and LCROSS are the first missions launched by the Exploration Systems Mission Directorate. Their data will be used to advance goals of future human exploration of the solar system. LRO will spend at least one year in low polar orbit around the moon, collecting detailed information for exploration purposes before being transferred to NASA's Science Mission Directorate to continue collecting additional scientific data. Goddard manages the Lunar Reconnaissance Orbiter. Ames manages the Lunar Crater Observation and Sensing Satellite. LRO is a NASA mission with international participation from the Institute for Space Research in Moscow. Russia provides the neutron detector aboard the spacecraft. Northrop Grumman in Redondo Beach, California, built the LCROSS spacecraft.

The included video uses existing datasets to show what LRO's topography data might look like (some elevation data provided by JAXA/SELENE).