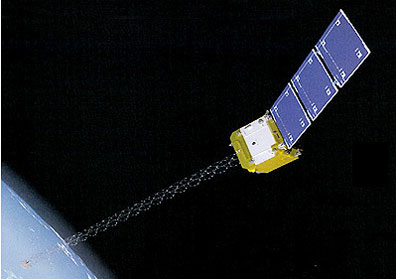 Artistic rendition of an ORBCOMM OG2 satellite on orbit.

ORBCOMM’s advanced OG2 satellites are providing M2M messaging and Automatic Identification System (AIS) service for its global customers.  ORBCOMM successfully launched the first six OG2 satellites on July 14, 2014, aboard a dedicated SpaceX Falcon 9 rocket from Cape Canaveral Air Force Station, Florida. After comprehensive in-orbit testing, the six satellites have been properly spaced within their orbital planes and are now processing more 20 percent of the network’s M2M traffic.  With the addition of the OG2 satellites, ORBCOMM is now collecting over 13 million AIS messages from more than 130,000 unique vessels per day, surpassing all other AIS networks in service quality.

ORBCOMM has completed the satellite thrust maneuvers to equally position five of the OG2 satellites within their plane (now referred to as Plane K) to provide optimum coverage and fill the gap in the existing OG1 constellation.  The sixth satellite will be placed in a lower elliptical orbit, which will enable the satellite to drift to a new orbit plane that will be 90 degrees from Plane K and will be the first member of Plane L. The OG2 satellites are fully backwards compatible with ORBCOMM’s existing OG1 network.  ORBCOMM’s customers do not need to change or upgrade their fielded devices and are now seamlessly using the six OG2 satellites to send and receive messages for their applications with their existing platforms.

“Through great teamwork among Sierra Nevada Corporation, Boeing and ORBCOMM’s engineering and network operations teams, we have been able to quickly validate the  performance of the six OG2 satellites,” said John Stolte, ORBCOMM’s Executive Vice President of Technology & Operations. “Customers are experiencing significantly improved service, particularly during parts of the day when we previously had limited satellite coverage. The versatility of the OG2 satellites will also enable us to further improve communication capabilities to ensure we are providing our customers with the highest levels of reliability, coverage, service and performance.”

“While we’ve come a long way with the inaugural launch of OG2 service, we are now focused on the second phase of the OG2 constellation and launching the last 11 satellites as part of our second mission, which will enable us to provide new OG2 features and services around the clock and continue to bring AIS ship visibility down from hours to minutes,” said Marc Eisenberg, Chief Executive Officer of ORBCOMM. “We look forward to providing our customers with the only fully funded, fully operational, second generation satellite network purpose-built for the global M2M industry.”

The ORBCOMM infosite may be accessed at http://www.orbcomm.com