[SatNews] China successfully launched the Tianlian I-03 satellite on Wednesday from...

...the Xichang Satellite Launch Center in Sichuan province, completing the country's first data relay satellite network system. The satellite was launched on a Long March-3C carrier rocket at 11:43 p.m. Beijing Time, according to sources with the center. Developed by the China Academy of Space Technology under the China Aerospace Science and Technology Corporation, the satellite will join its two predecessors to realize global network operation after in-orbit validation and system coordination procedures are carried out. The first data relay satellite, the Tianlian I-01, was launched in April 2008, and the second was launched in July 2011. 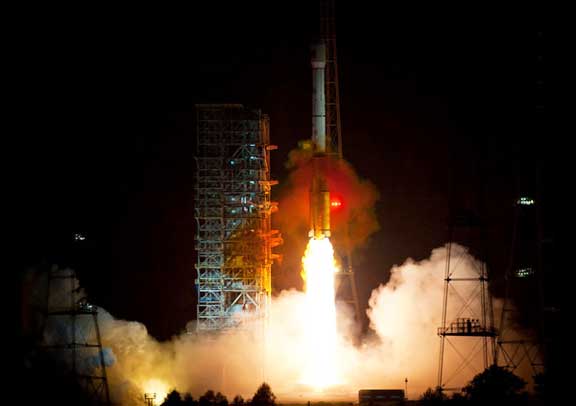 This third satellite is expected to improve the network's coverage in providing measurement and control services for China's manned spacecraft as well as the planned construction of future space labs and space stations, according to the center. The network will also offer data relay services for the country's medium- and low-Earth orbits as well as measurement and control support for spacecraft launches. The two-satellite network had previously played a key role in assisting in two space docking missions—an automated one between the Tiangong-1 lab module and the Shenzhou-8 spacecraft in late 2011, and a manual docking between Tiangong-1 and Shenzhou-9 in June. Wednesday's launch marked the 166th mission of China's Long March series of rockets.