[SatNews] Astrium has won a new competitive contract from the European Space Agency (ESA), as a follow-up to the Next Exploration Science and Technology (NEXT) study to develop a Lunar Lander. 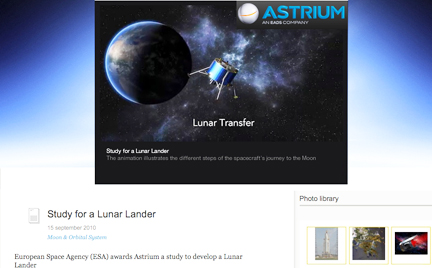 Astrium Lunar Lander infopage link...
The Lunar Lander Phase B1 study will aim to complete the mission design for landing an automated vehicle near the south pole of the Moon. The new contract, valued at 6.5 million euros with a significant contribution from Germany, will see the study run for 18 months to the end of 2011. The final result of the study will be a fully defined mission concept and a detailed design of the landing vehicle and Moon rover. The study will consolidate the system design concept — together with an initial design for the landing module and the essential technologies for an automatic, soft and precise landing. Other aspects of the study include testing engine hardware components and navigation sensors using equipment capable of recreating a realistic lunar environment. The Phase B1 study will confirm the Lunar Lander’s overall cost and schedule as a basis for a decision on the financing of the full mission at ministerial level at the next ESA Council Meeting. Following this decision and once the Phase B1 study is complete, ESA will then be able to move on to the next step of the programme by issuing a contract for the development, construction and testing of the Lunar Lander.