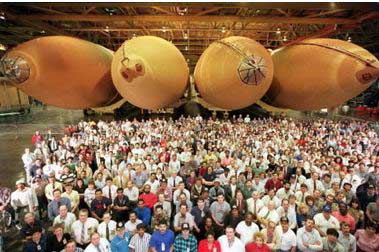 More than 500 Lockheed Martin workers pose in front of four completed shuttle external tanks in this file photo showing NASA's Michoud assembly center near New Orleans. The last tank rolled off the line today, and all of these workers are now unemployed AP Photo
[SatNews] It is important to be appreciated for a job well done, and it's a whole lot more fun when there's a parade of sorts — even if it commemorates a bittersweet event. NASA and Lockheed Martin Space Systems Company held a ceremony on Thursday, July 8, at NASA's Michoud Assembly Facility in New Orleans. The event pays tribute to the external tank rollout for the last space shuttle flight and commemorates tank deliveries for 134 shuttle launches.

Over 1,000 people gathered Thursday on the grounds of NASA's Michoud Assembly Center in eastern New Orleans to send off the last external fuel tank for the space shuttle program. The ceremony, which had a distinct New Orleans flair, was bittersweet but offered plant workers a chance to celebrate their involvement in the space program even as fears loom about the facility's future. 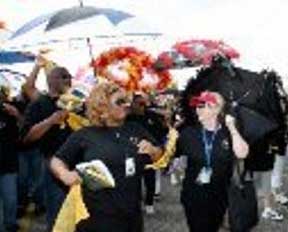 John McCusker/The Times-Picayune Netsy Wheeler and Karen France dance to the music of the Storyville Stompers as they celebrate the rollout of the last external fuel tank at the Michoud Assembly Facility.
The crowd gathered under and around a tall white tent to listen to speeches by officials from NASA and Lockheed Martin, the company contracted to build the shuttle, as well as local, state, and federal figures. The fuel tank, which many Americans know as the huge cylindrical structure underneath the shuttle and between the white rockets on take-off, towered in the background, and several speakers pointed to it as they commended the plant's workers for their hard work and dedication.

The last external tank, designated ET-138, will travel on a wheeled transporter one mile to the Michoud barge dock, accompanied by the Storyville Stompers, a traditional area brass band, and hundreds of handkerchief-waving employees. The tank will travel on a 900-mile sea journey to NASA's Kennedy Space Center in Florida, where it will support shuttle Endeavour's STS-134 launch.

During a launch, the external tank delivers 535,000 gallons of hydrogen and oxygen liquid propellants to the three main engines, which power the shuttle to orbit. The tank is covered by polyurethane-like foam, with an average thickness of about one inch. The foam insulates the propellants; keeps ice from forming on the tank's exterior; and protects its aluminum skin from aerodynamic heat during flight. 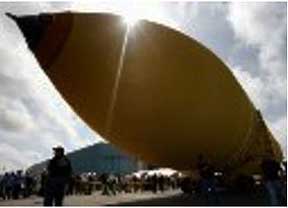 John McCusker/The Times-Picayune The last external fuel tank made at the Michoud Assembly Facility in eastern New Orleans rolled out Thursday morning.
The external tank is the largest element of the space shuttle, which also includes the orbiter, main engines and twin solid rocket boosters. It measures 27.6 feet wide and 154 feet tall. Despite the tank's size, its aluminum skin is only one-eighth-inch thick in most areas. Yet, it withstands more than 7.5 million pounds of thrust during liftoff and ascent. The tank is the only major shuttle component that is not reused.

"A lot like that tank, the workforce here is the backbone of the space shuttle program," said Bill Hill, Assistant Associate Administrator of the Space Shuttle Program. Hill and other officials from NASA and Lockheed Martin repeatedly expressed admiration at the way the plant's workers handled Hurricane Katrina. When that storm devastated New Orleans in 2005, some plant workers stayed behind to operate the pumps, keeping water from causing significant damage.

Harry Wadsworth, a spokesperson for Lockheed Martin, said that the company has gradually been cutting the number of workers at the plant. He said the company employed about 2,700 people in 2008; today it employs just over 1,000. In it's hey-day, Michoud employed as many as 12,000 people. But Wadsworth said advances in production and computer technology have meant the plant has required less and less workers. Wadsworth said there will still be jobs in the short term — a spare tank is still in production, and some crew are necessary in case repairs have to be made. "The facility will not close down, but worker numbers will decrease," Wadsworth said. "Everybody has our date." Many workers in attendance expressed concern about the future of their employment.

"The real remarkable thing here isn't the engineering or the technology — it's you guys," said Robert Lightfoot, director of the Marshal Space Flight Center in Huntsville Alabama, which oversees the Michoud factory. Commander Mark Kelly, an astronaut scheduled to fly on the shuttle that will use the tank, said he appreciated the complex work necessary to make the tank. "We really appreciate how complex this tank is," he said. "I don't think the public gets it."

Kelly says he and other astronauts have come to depend on the facility for reliable hardware. "I personally appreciate what that goes through," he said, pointing at the tank. But for all the accolades, the ceremony was tinged with doubt about the facility's future.

The last space shuttle flight is scheduled to occur in February of next year, leaving many workers at Michoud fearing for their jobs. Government officials speaking at the event said they were fighting to keep jobs at the plant. Sen. David Vitter, R-LA, sharply criticized the Obama Administration for shutting down the space shuttle program. "In terms of the proposal and the future, you all deserve better — and the nation deserves better," he demanded, to thunderous applause from the audience.

Vitter said he is fighting alongside other congressmen both Republican and Democratic to keep the program alive. He said the current administration's space strategy would put the United States' space program behind international competition.