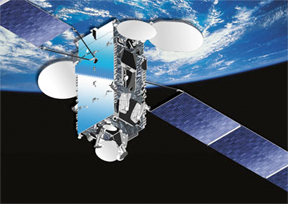 Artistic rendition of the
Yamal-402 satellite
[SatNews] The Yamal 402 satellite is now ready for its launch...

...expected on December 8th from Baikonour in Kazakstan. The launch campaign is ending and the satellite is now encapsulated into the upper part of the launcher, which has been transferred to the launch pad. Thales Alenia Space is prime contractor for this program, on behalf of Russian operator Gazprom Space Systems. The company is responsible for the design, production, testing and turnkey delivery of the satellite, along with the associated ground segment.

Fitted with 46 Ku-band transponders, Yamal-402's coverage zone includes Russia, the Commonwealth of Independent States, Europe, the Middle East and Africa. It is built on a Spacebus 4000 platform developed by Thales Alenia Space and will be positioned in geostationary orbit at 55 degrees East. The satellite weighed 4,500 kg at launch, and offers a design life exceeding 15 years.