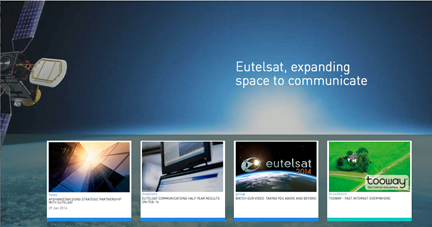 The first agreement ends the arbitral procedure between Eutelsat and SES that was initiated in October 2012 under the rules of the International Chamber of Commerce (ICC) in Paris. The dispute concerned a right of use of 500MHz spectrum at the 28.5 degrees East orbital position. Eutelsat ceased to operate this spectrum on October 3, 2013, and SES has operated this spectrum since that date. The dispute over this right of use has now been resolved, with SES continuing to operate its satellites at this location, and Eutelsat independently commercializing part of the capacity of the previously disputed frequencies.

According to the second agreement between both companies, Eutelsat has, therefore, contracted long-term satellite capacity on the SES satellite fleet at the 28.5 degrees East orbital position. Eutelsat will commercialize over Europe on the SES fleet 125MHz (eight transponders) of the formerly disputed 500MHz. Eutelsat will also commercialize on the SES fleet the 250MHz (12 transponders), which was not the subject of the legal proceedings. The 20 transponders will be operated on three new satellites which SES is deploying at the 28.2/28.5 degrees East neighborhood—ASTRA 2F, ASTRA 2E and ASTRA 2G—of which the first two have been launched and are operational, while the third is planned for a launch later this year.

The third agreement between the two companies addresses technical frequency coordination under the rules of the International Telecommunication Union (ITU). This agreement will allow both parties an optimized use of their respective spectrum at a number of orbital positions over Europe, the Middle East and Africa and also confirms and clarifies, in technical terms, the geographic coverage and transmission power levels for frequencies at these positions.

"The agreements with Eutelsat create a secure framework for operations in major broadcasting and data markets in Europe, Middle East and Africa", said Romain Bausch, President and CEO of SES. "They are beneficial for our whole industry and, above all, for our customers and end users as they experience optimal satellite services. The agreements allow SES to fully leverage its satellite and fleet investments and operate its assets and frequency spectrum efficiently. We can focus on further commercializing our satellite capacity and ensuring excellent services for customers and users worldwide."

Michel de Rosen, Chairman and CEO of Eutelsat, said: "Guided by key objectives to deliver clients impeccable service and to optimize spectrum use, Eutelsat and SES have taken a pragmatic and business-like approach to reaching this settlement. These long-term agreements clarify the conditions for interference-free operations, enabling each company to independently expand its commercial activity in a competitive environment. Eutelsat is committed to delivering innovative services at one of the most vibrant neighborhoods in the broadcasting market and can now further improve the productivity of its in-orbit resources and future investments."

For further information regarding SES, their infosite may be accessed at: http://www.ses.com/

For additional details regarding Eutelsat Communications, their infosite is located at: http://www.eutelsat.com/