Russian scientists will soon meet in secret to work on a plan for saving Earth from a possible catastrophic collision with a giant asteroid in 26 years, the head of Russia's space agency said last Wednesday. "We will soon hold a closed meeting of our collegium, the science-technical council to look at what can be done" to prevent the asteroid Apophis from slamming into the planet in 2036, Anatoly Perminov told Voice of Russia radio. 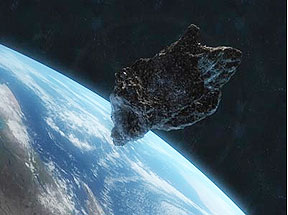 "We are talking about people's lives," Perminov was quoted by news agencies as telling the radio station. "Better to spend a few hundred million dollars to create a system for preventing a collision than to wait until it happens and hundreds of thousands of people are killed," he said.

The Apophis asteroid measures approximately 350 metres (1,150 feet) in diameter and RIA Novosti news agency said that if it were to hit Earth when it passes nearby in 2036, it would create a new desert the size of France. Perminov said a serious plan to prevent such a catastrophe would probably be an international project involving Russian, European, U.S. and Chinese space experts. Interfax quoted him as saying that one option would be to build a new "space apparatus" designed solely for the purpose of diverting Apophis from a collision course with Earth safely. "There won't be any nuclear explosions," Perminov said. "Everything will be done according to the laws of physics. We will examine all of this."

In a statement dated from October and posted on its website, NASA said new calculations on the path of Apophis indicated "a significantly reduced likelihood of a hazardous encounter with Earth in 2036. Updated computational techniques and newly available data indicate the probability of an Earth encounter on April 13, 2036, for Apophis has dropped from one-in-45,000 to about four-in-a-million," NASA said. RIA Novosti said the asteroid was expected to pass within 30,000 kilometres (18,600 miles) of Earth in 2029 — closer than some geo-stationary satellites — and could shift course to hit Earth seven years years after that. (Source: Stephen Collinson, 2009, AFP)