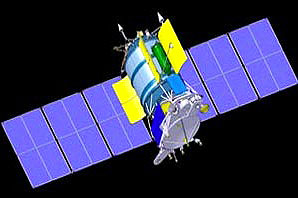 Artistic rendition of the Geo-IK-2 satellite
[SatNews] From missing to found, data analysis is now underway...

The Russian Space Forces has re-established contact with a military satellite, Geo-IK-2, which went missing in February, local media reported Friday. According to a spokesman from the Defense Ministry, the Interfax news agency said the Space Forces had already received telemetric information from the satellite and collection and analysis of the data were currently underway. After studying the information, the Defense Ministry will make a decision regarding the further use of the satellite, the spokesman said. A Rokot light-class carrier rocket carrying the Geo-IK-2 satellite blasted off February 1st from Russia's Plesetsk launching site, but placed the satellite in an incorrect orbit. After the launch, the Defense Ministry announced it had lost contact with the Geo-IK-2 and later abandoned the satellite. The Russian Space Forces then grounded launches of all Rokot light-class carrier rockets until the completion of an investigation into the failed launch.