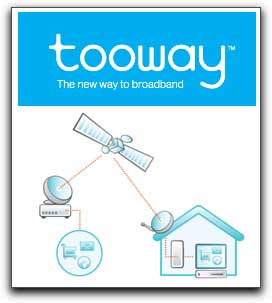 Eutelsat Communications (Euronext Paris: ETL) has welcomed the initiatives in the Government’s Digital Britain report and stated that its Universal Service Commitment to deliver a 2Mbps broadband service to all U.K. residents by 2012 can be delivered today using existing satellite technology.

Tooway is the first satellite two-way broadband service offering speeds and costs similar to ADSL. The service is based on Eutelsat’s satellite coverage, the commercial and infrastructure operating experience of Eutelsat’s subsidiary Skylogic, and SurfBeam technology developed by ViaSat. This technology used by Tooway comes to Europe after acquiring extensive experience on the North American market, where ViaSat already provides the equipment and network for more than 400,000 homes with satellite broadband access fully independent from the terrestrial network. Today, Tooway is already serving customers in more than 20 European countries including the U.K., Germany, France, Spain, Italy, Switzerland, and Ireland, with additional countries across Europe rolling-out over the coming months.

The Tooway solution consists of a small satellite dish and a modem connected to the PC via the Ethernet, giving customers immediate broadband access following a simple installation. In addition, the Tooway service has the ability to deliver Voice over satellite telephony services and Direct-to-Home television using the Tooway dish. Tooway™ is delivered via a network of certified distributors. In 2010, Eutelsat will expand the service with additional broadband access up to 10Mbps. These revolutionary broadband speeds will come from the launch of KA-SAT, the dedicated new satellite from Eutelsat specifically designed for broadband delivery in Europe. The satellite, which has the combined capacity of 40 traditional satellites, will enable Eutelsat to serve up to two million European homes at a similar speed, price and quality to terrestrial ADSL2 services.