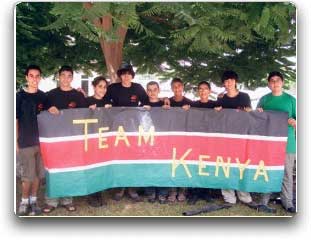 As recently reported by Gulf News, students from the Universal American School (UAS) in Dubai raised Dh71,000 and started out on an expedition to the African nation last week. They are set to rebuild and equip a school and orphanage in the Kenyan town of Karenaimi.

Moved by the recent Gulf News report, Abdul Bakhrani, Chief Executive Officer (CEO) of Intersat Africa Group said, upon hearing about UAE students going to Kenya, "I was very keen on contributing something and the only thing I can contribute is internet access."

The Intersat Group focuses on rural connectivity. It has committed itself with millions of dollars to provide information communications technology (ICT) in rural Africa, "For the pure sake of enabling and empowering the Africans in the region," said Bakhrani, who is also from Kenya.

Organisers of the UAS expedition, 'World Challenge', announced this proposal as the first of its kind in the 22 years of the organisation's operations.

"This is our first actual proposal to subsidise something like this. People have donated footballs and sports equipment. A solar power company once donated solar panels...but nobody has ever proposed something on such a large scale as this," said Claire Ellaway, Middle East Regional Director of 'World Challenge'.

Gulf News has put the two organisations in contact to pursue the possibility of collaborating on this project as further study into the matter is required. "With any foreign aid that goes into the developing world, you always need to speak to the community directly," explained Ellaway. "We need to make sure it's sustainable for the community," she said.

"I am surprised and very happy that Intersat have considered such a contribution. This is really unexpected," said Greg Parry, Secondary Principal of UAS, upon hearing the news while on holiday in Australia. "This trip started because of an idea of a small group of people who wanted to help kids in Africa, but to get support from such a large company is overwhelming," Parry continued. "This is a great opportunity for these children to gain access to the rest of the world through the internet, because money alone doesn't provide a quality education. It is the exposure to ideas that boost education and it's opportunities," said Parry.

Collaborating on much larger projects with conglomerates such as Microsoft and Cisco in the New Partnership for Africa's Development (NEPAD), the Intersat Group's main concern is "getting services to the bottom end of the pyramid," said Bakhrani. He explained that a large majority of Africans do not live in urban areas.

Established in 2000, the company chose to remain out of the public eye, but has now emerged in order "to raise awareness that rural Africa needs help from companies with the resources," and affirm that "Intersat is willing to spearhead it with World Challenge," said Bakhrani.

This article may be found at at this direct link