[SatNews] Mitsubishi Electric Corporation (TOKYO: 6503) has been selected as the contractor to supply the Japan Aerospace Exploration Agency (JAXA) with the Greenhouse gases Observing SATellite-2 (GOSAT-2) satellite system, which is slated to launch in 2017. Mitsubishi Electric expects to be formally authorized to proceed with the development in April, after completing an engineering contract with JAXA to finalize definitive performance requirements. 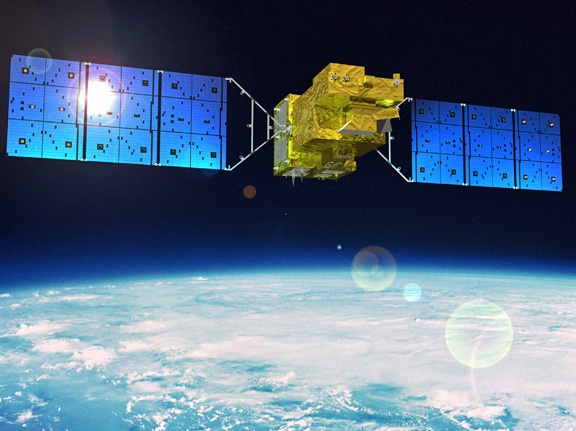 Mitsubishi Electric will organize a GOSAT-2 exhibition at the 15th Eco-Products show, which will be held at the Tokyo Big Sight exhibition complex in Tokyo, Japan from December 12 to 14. GOSAT-2 will be the successor to IBUKI (also known as GOSAT), which was launched in January 2009 as the world's first satellite dedicated to greenhouse-gases observation. Mitsubishi Electric will provide not only the spacecraft system, as it did for IBUKI, but also a turnkey system that includes development of the GOSAT-2’s next-generation sensors and ground system, as well as providing operation services throughout the orbital design life of the satellite.

Since the signing of the Kyoto Protocol in Kyoto, Japan in 1997 during the 3rd Session of the Conference of the Parties to the United Nations Framework Convention on Climate Change (COP3), industrial countries have been working to reduce greenhouse gas emissions, such as carbon dioxide and methane. As one of Japan’s contributions to these efforts, IBUKI was jointly planned and developed by the Ministry of the Environment (MOE), the National Institute for Environmental Studies (NIES) and JAXA. IBUKI collected data on an intensive, worldwide scale, and this data was combined with existing ground-based measurement data to ascertain the global distribution of greenhouse-gas concentrations.

GOSAT-2, like IBUKI, is a joint project of MOE, NIES and JAXA. Its high-performance sensor instrumentation will enable the collection of even more accurate data than was possible with IBUKI. The GOSAT-2 program is an integral initiative of the Proactive Diplomatic Strategy for Countering Global Warming, which was announced by the Japanese government at COP19. Several other greenhouse-gas observation satellites also are planned, such as the USA’s OCO-2 and Europe’s Carbonsat. Along with these efforts, GOSAT-2 is expected to play a major role in the international framework for space-based greenhouse-gas observation.