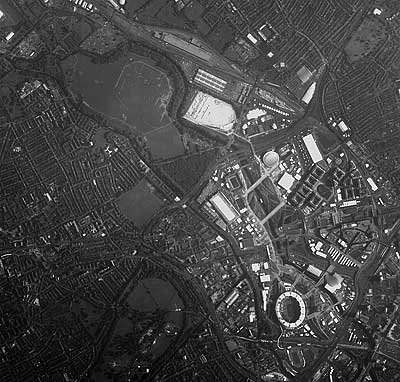 The London Olympic Park including Olympic Stadium is visible towards the base of this Proba-1 High Resolution Camera image of East London, acquired on 11 August 2012. The 5-m resolution black and white image covers 25 sq km.
Credits: ESA
[SatNews] This Olympics has been watched from all over the world—and beyond.

Benefiting from a cloudless sky, this view of London’s Olympic Park was captured by the smallest imager aboard ESA’s smallest mission: the High Resolution Camera on the Proba-1 microsatellite. The Olympic Park, dominated by the circular Olympic Stadium, is visible towards the base of this 5m-resolution image, with Victoria Park to its west and Hackney Marsh to the northwest.

This image was acquired by the High Resolution Camera (HRC). This black and white digital camera incorporates a Cassegrain telescope miniaturized to fit aboard Proba-1. Orbiting Earth at 720km altitude, the entire satellite’s volume is less than a cubic metre. HRC operates alongside Proba-1’s larger CHRIS (Compact High Resolution Imaging Spectrometer) hyperspectral imager, which takes 15m-resolution scenes across a programmable selection of up to 62 spectral bands, from a variety of viewing angles. This HRC image was acquired on August 11, 2012.