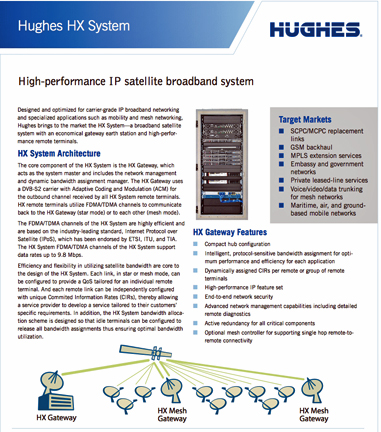 Launched in 2012, the HX System 4.0 includes a host of technology enhancements such as low jitter/delay and real-time streaming, making it ideal for cellular backhaul applications. Additionally, the HX90 satellite broadband router features a new optimized encapsulation scheme on the outroute and advanced LDPC coding on the inroute, yielding best-in-class throughputs and lowest o perational costs on satellite links. Hughes was selected based on its excellent reputation among existing customers in the region and Majunusa ’s success in operating their first Hughes HX System ordered at the end of 2011. Installation of the new HX network has begun and is expected to be completed by April 2013.