[SatNews] Sunday seemed to be a day filled with calamaties, from the 777 jet crash at SFO to the derailed train with crude oil.

Early in the morning on June 6, 2013, a train carrying crude oil derailed in Lac-Mégantic, Quebec. The resulting crash and series of explosions killed at least 13 people, destroyed 40 homes, and forced 2,000 people to evacuate the town. 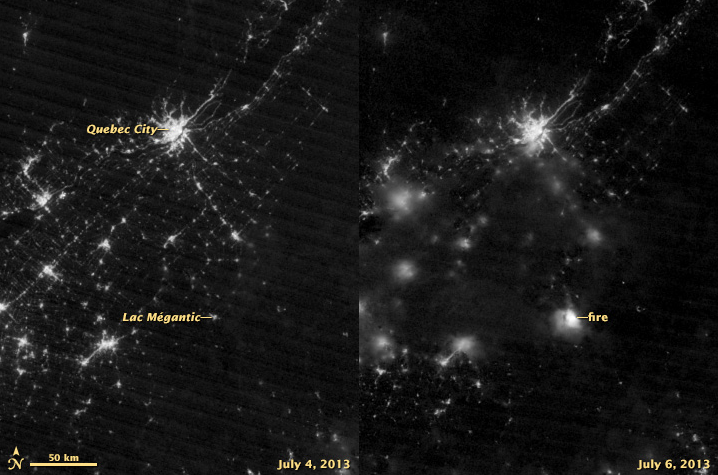 NASA Earth Observatory image by Jesse Allen and Robert Simmon, using VIIRS Day-Night Band data from the Suomi National Polar-orbiting Partnership. Suomi NPP is the result of a partnership between NASA, the National Oceanic and Atmospheric Administration, and the Department of Defense. Caption by Adam Voiland. Instrument: Suomi NPP - VIIRS

The fire was visible to the Visible Infrared Imaging Radiometer Suite (VIIRS) on the Suomi NPP satellite. The image on the right was acquired at 6:59 GMT (2:59 a.m. local time) on July 6 by the instrument’s “day-night band,” which detects light in a range of wavelengths from green to near-infrared and uses filtering techniques to observe signals such as city lights, auroras, fires, and reflected moonlight. The image on the left, shown for comparison, was acquired by the same instrument on July 4, before the derailment. Light sources are not as crisp in the July 6 image because of cloud cover.