CPT Test Lead Peter Gonzales, of NASA, Goddard, said, "The CPT is the test that verifies that the observatory can do everything we designed it to do," he said. He spent months talking with each team that engineered the spacecraft's subsystems and two instruments, the GPM Microwave Imager (GMI) and the Dual-frequency Precipitation Radar (DPR), to design the tests that would evaluate how the GPM spacecraft functions as a whole. When the observatory's flying on-orbit, all of the subsystems are operating together. We're not running a single subsystem in isolation," said Gonzales. "We want to see all the subsystems work together. We want to see if we're running a test on the RF [radio frequency communications] system, if it's being affected by the power system and vice versa."

In the Goddard clean room where the GPM Core Observatory was assembled, the spacecraft was oriented the way it would be if it were flying in space. It's about the size of a small fire truck but twice as heavy. During the test, the scanning antenna of the GMI, built by Ball Aerospace Corp. in Boulder, Colorado, rotated in place as it would in orbit to collect data, the High Gain Antenna for communications inched around to orient toward a simulated receiver, and the mechanisms for the solar arrays, which were not attached, turned as if tracking the sun. In the control room next door, more than 20 engineers occupied every workstation where telemetry data from the tests streamed by lightening fast on their screens. Each subsystem and instrument was represented by the engineers that built it to make sure everything was going as expected, including a team from NASA's partner the Japan Aerospace Exploration Agency (JAXA) that built the DPR and will launch the GPM Core Observatory on a Japanese H-IIA rocket from an island in southern Japan.

"There are some 30 odd units being tested," said Candace Carlisle, Deputy Project Manager for GPM at Goddard. Every subsystem on the observatory, from propulsion to the two instruments, went through the process of being turned on and/or deployed after launch and then run through every function, she said. Each test was run more than once since almost all of GPM's systems and instruments are redundant in case of failure in orbit. The electronics have an A-side and a B-side with two identical computers, though only one is active at a time. If the A-side fails, or in some cases if even a single A-side subsystem fails, the B-side can take over. 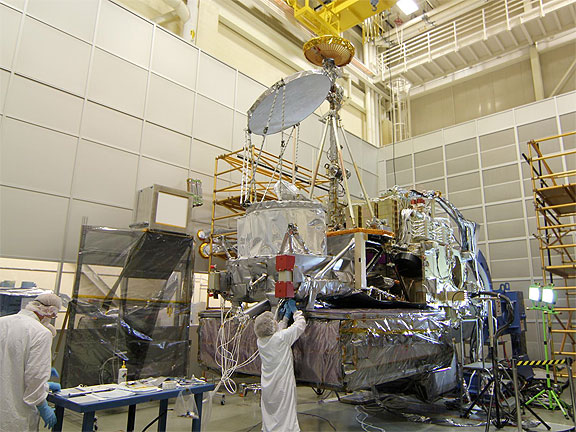 Engineers check on the GPM spacecraft after successful completion of its first comprehensive performance test. The silver disc and drum (center) is the GPM Microwave Imager, and the large block on the base is the Dual-frequency Precipitation Radar. The tall golden antenna is the High Gain Antenna for communications.

The comprehensive test went well, said Gonzales. They found the expected small hiccups that are normal when an observatory is first brought online as a unit, but no hardware problems or anything that would prevent them from moving forward, he said. As the test progressed, the engineering teams were learning the nuances of how the spacecraft runs, said Gonzales, which is essential to know before going into the thorough environmental testing scheduled to begin in November 2012. In environmental testing, the GPM Core Observatory will be pushed to its limits as it goes through the rigors of the extreme temperature changes and electromagnetic interference it might experience in space, and the vibration and noise levels it will encounter during launch. The results of the comprehensive testing will serve as a baseline to compare to the results of the environmental tests.

The GPM mission is an international satellite mission that will set a new standard for precipitation measurements from space. The observatory will collect advanced measurements of rain and snow that will be combined into a global data set every three hours. The GPM observatory is scheduled to launch in early 2014. GPM is a joint mission between NASA and the Japanese Space Agency, JAXA.