Iran... Why, Of Course This Is A Satellite Tasked With Peaceful Intentions (Launch) 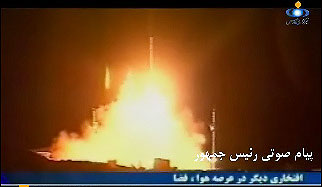 The satellites was sent into orbit on Wednesday (June 15), according to media reports. Called Rasad-1 (Observation-1), the satellite was aboard an Iranian-made Safir rocket, according to Iran's official Islamic Republic News Agency (IRNA). According to IRNA, Rasad-1 will be used for peaceful purposes, mapping and monitoring the Earth from an altitude of 162 miles (260 kilometers). "Rasad satellite’s mission is establishing contact with Earth stations, obtaining orders from those stations, image taking from the Earth and dispatching those images along with telemetry information back to the Earth stations," IRNA reported. However, the launch is certain to raise concerns in the West that the country is ramping up its space capabilities for military purposes... as usual. The same rockets that can launch satellites could, theoretically, also be used to fire warheads. Rasad-1 weighs approximately 34 pounds (15.3 kilograms).