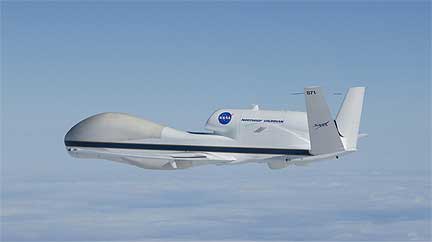 NASA's Global Hawk No. 871 cruises over low cloud layers above the Dryden Flight Research Center on Edwards Air Force Base, Calif. This was the first Global Hawk built in the original Advanced Concept Technology Demonstration program, joining NASA's other Global Hawk, No. 872, for high-altitude, long-endurance environmental science missions.
(NASA/Lori Losey)
[SatNews] NASA's Hurricane Severe Storm Sentinel Mission, or HS3, will be studying hurricanes at the end of the summer, and there will be...

...two high-altitude, long-duration unmanned aircraft with different instruments flying over the storms. The unmanned aircraft, dubbed "severe storm sentinels," are operated by pilots located in ground control stations at NASA's Wallops Flight Facility in Wallops Island, Virginia, and NASA's Dryden Flight Center on Edwards Air Base, California. The NASA Global Hawk is well-suited for hurricane investigations because it can over-fly hurricanes at altitudes greater than 60,000 feet with flight durations of up to 28 hours.

Using unmanned aircraft has many advantages. Hurricanes present an extreme environment that is difficult to sample. They cover thousands of square miles in area, and can also extend up to 50,000 feet in altitude. Second, they involve very high winds, turbulence and heavy precipitation. Third, ground conditions (high winds that create heavy seas or blowing material) make surface observations difficult.

Two NASA Global Hawks will be flying during the HS3 mission. Each will have different payloads, or collections of instruments aboard. Necessary observations are winds, temperature, humidity (water), precipitation, and aerosol (particle) profiles from the surface to the lower stratosphere.

The first Global Hawk payload, installed in aircraft No. 872, will consist of three instruments. That payload is for sampling the environment that hurricanes are embedded within. A laser system called Cloud Physics Lidar (CPL) developed at NASA Goddard will be located in the Global Hawk's nose. CPL measures cloud structure and aerosols such as dust, sea salt particles, smoke particles by bouncing laser light off of those particles and clouds. An infrared instrument called the Scanning High-resolution Interferometer Sounder, or S-HIS, from the University of Wisconsin in Madison, will be located in the belly of the Global Hawk. It can be used to remotely measure or remotely sense the temperature and water vapor vertical profile along with the sea surface temperature and some cloud properties. A dropsonde system from the National Center for Atmospheric Research and National Oceanic and Atmospheric Administration will be located in the tail of the aircraft. The dropsonde system ejects small sensors tied to parachutes that drift down through the storm measuring winds, temperature and humidity. 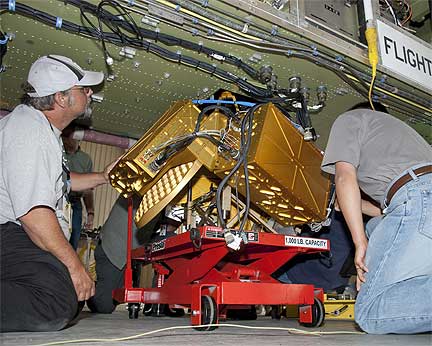 Technicians prepare to install the High-Altitude Imaging Wind and Rain Profiler, or HIWRAP, on the underside of a NASA Global Hawk. HIWRAP is one of the science instruments being carried by the remotely operated high-altitude aircraft during the Hurricane and Severe Sentinel missions.
(NASA/Tony Landis)
Global Hawk No. 871 will also carry a payload of three instruments. That Global Hawk's prime responsibility is to sample the cores of hurricanes. A microwave system called the High-Altitude MMIC Sounding Radiometer or HAMSR, created by NASA's Jet Propulsion Laboratory in Pasadena, California, will be located in the aircraft's nose. HAMSR measures temperature, water vapor, and vertical precipitation profiles. A radar system called the High-altitude Imaging Wind & Rain Airborne Profiler or HIWRAP from NASA Goddard will be located in the second (No. 871) Global Hawk's belly. It is similar to a ground radar system but pointed downward. HIWRAP measures cloud structure and winds. The Hurricane Imaging Radiometer (HIRAD) from NASA's Marshall Space Flight Center in Huntsville, Alabama, will be located in the aircraft's tail section. HIRAD measures microwave radiation emitted from the surface and atmosphere. The HIRAD observations yield surface wind speeds and rain rates.

Both Global Hawks will be flying out of NASA Wallops Flight Facility in September, the peak month for the Atlantic Hurricane Season.