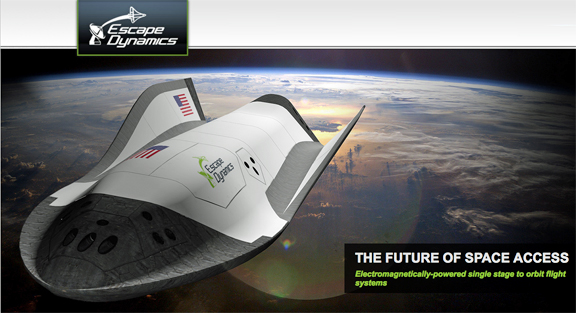 Specific Impulse (or Isp) is a measure of rocket or jet engine efficiency, much like miles-per-gallon for cars. While chemical rockets top out at around 460 seconds Isp, static thrust tests conducted in the company’s lab in Colorado using helium demonstrated an Isp above 500 seconds. Had hydrogen been used instead of helium, the specific impulse achieved would have been above the 600 seconds threshold required for single-stage-to-orbit operations of a launch vehicle, which is not possible with chemical rockets. These results are an important milestone in the development of a reusable, single-stage-to-orbit spaceplane which will be a radical game changer in space access.

For more than a half a century, space access has been solely dependent upon large, expendable chemical rockets, which Escape Dynamics plans to change by using microwave energy delivered wirelessly to a heat exchanger on the spaceplane during the entire ascent via a phased array of microwave antennas located on the ground. Instead of chemical combustion, Escape Dynamics’ spaceplane will be propelled by ejecting hydrogen, heated with the microwave energy, as it flows through the heat exchanger and will be exhausted through the nozzle creating thrust.  After the spaceplane reaches orbit and deploys the payload, it will glide back to the launch pad, refuel, and will be ready for its next flight.

Escape Dynamics’ recent tests demonstrated a full sequence of operation of an externally-powered propulsion system. Energy was drawn from the electric grid, converted into microwaves using a gyrotron, guided through a system of beam shaping mirrors, and beamed from an antenna to a thruster. Conversion of the microwave energy into thrust was performed using a thermal thruster with a highly efficient microwave-absorbing heat exchanger.  The heat exchanger was designed to capture more than 90% of the incoming microwave energy and heat the propellant flowing through it towards the nozzle.

“Our recent tests are a major step forward in the continued advancement of our externally-powered high Isp thruster and validation of our efforts to change the manner of orbital launches” said Richard F. Schaden, co-founder and Chairman of the Board of Escape Dynamics.

Dr. Dmitriy Tseliakhovich, CEO/CTO, said, “We, for the first time, conclusively demonstrated that a new propulsion technology that goes beyond chemical rockets and that can be used for orbital launch works on a lab scale, and we are confident that we can take it to multi-megawatt scales and eventually introduce it into single-stage-to-orbit spaceplanes that will change the way we reach orbit.”

“With this technology, we can uniquely bring to market reusable, single-stage-to-orbit spaceplanes, and aircraft-like operations to orbit, and significantly decrease the cost of access to space for payloads up to 200 kg”, said Laetitia Garriott, President.

Will Marshall, CEO of Planet Labs, said, “Currently, small satellite payloads cost approx. $25,000-50,000 per kilo to launch, and must share a launcher with other satellites. I’m very supportive of efforts to create lower cost and more regular access to space. Escape Dynamics is pursuing a radical technology — one I fundamentally think is a good idea — which could massively reduce the costs for small satellite payloads.”