NASA It's All About Image — Win A Prize (Contest) 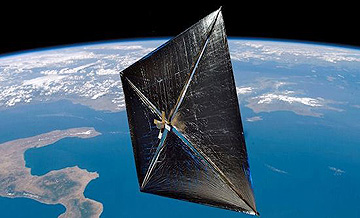 To encourage observations of NanoSail-D, Spaceweather.com is offering prizes for the best images of this historic, pioneering spacecraft in the amounts of $500 (grand prize), $300 (first prize) and $100 (second prize).

The contest is open to all types of images, including, but not limited to, telescopic captures of the sail to simple wide-field camera shots of solar sail flares. If NanoSail-D is in the field of view, the image is eligible for judging.

The solar sail is about the size of a large tent. It will be observable for approximately 70 to 120 days before it enters the atmosphere and disintegrates. The contest continues until NanoSail-D re-enters Earth's atmosphere.

NanoSail-D will be a target of interest to both novice and veteran sky watchers. Experienced astrophotographers will want to take the first-ever telescopic pictures of a solar sail unfurled in space. Backyard stargazers, meanwhile, will marvel at the solar sail flares -- brief but intense flashes of light caused by sunlight glinting harmlessly from the surface of the sail.

NanoSail-D could be five to 10 times as bright as the planet Venus, especially later in the mission when the sail descends to lower orbits. The NanoSail-D satellite was jointly designed and built by NASA engineers from the agency's Marshall Space Flight Center in Huntsville, Alabama, and NASA's Ames Research Center in Moffett Field, California.

Key sail design support was provided by ManTech/NeXolve Corp. in Huntsville. The NanoSail-D experiment is managed by Marshall. It is jointly sponsored by the Army Space and Missile Defense Command, the Von Braun Center for Science and Innovation and Dynetics Inc., all located in Huntsville.

To learn more about the NanoSail-D imaging challenge and contest rules, satellite tracking predictions and sighting times, visit: at. For more information about NanoSail-D, visit: at.