RUAG Space in Sweden has received its first order for satellite hardware from General Dynamics Advanced Information Systems. The order is for X-band antennas to downlink Earth observation data to ground stations. 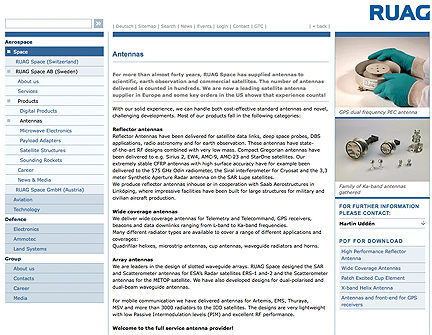 Antenna info...
The X-band antennas to be delivered to General Dynamics will be used on a satellite called the Landsat Data Continuity Mission (LDCM).The mission provides continuity in the multi-decadal Landsat land surface observations to study, predict, and understand the consequences of land surface dynamics. General Dynamics is the prime contractor and will build the satellite and integrate the instrumentation supplied by NASA. The satellite will be placed in a 705 km near-polar orbit in 2012.

The antenna type that has been ordered is specifically designed for use on-board low-earth orbiting observation satellites. The antenna type has earlier been delivered in large numbers for use on small earth observing satellites including the five RapidEye satellites. ESA’s coming laser radar wind mission, Aeolus, will also use these antennas, as will Japan’s Global Change Observation Mission, GCOM. Some adaptations to the customer needs will be made and two flight models will be delivered next summer. RUAG Space in Sweden has more than 30 years of experience from design and manufacture of space antennas. A large number of these antennas are Quadrifilar helix antennas used for Telemetry and Telecommand at S-band Frequencies. The X-band antennas benefit from this strong heritage.