[SatNews] ESA’s Earth-observing satellite Envisat has moved to a lower orbit in order to conserve fuel and extend its life by three years, and is once again delivering invaluable data to thousands of scientists. 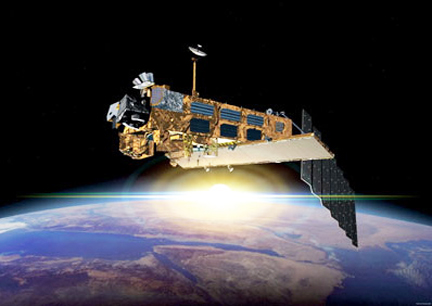 Artist's impression of Envisat. Credits: ESA
Envisat, launched in 2002, has a unique combination of 10 different instruments that collect data about Earth’s atmosphere, land, sea and ice – providing scientists with the most detailed picture yet of the state of our planet. Initially intended to stay in orbit for five years, the decision was taken to extend the mission until 2010. However, given the overall excellent condition of the satellite, ESA Member States agreed last year to fund the mission through to 2013. 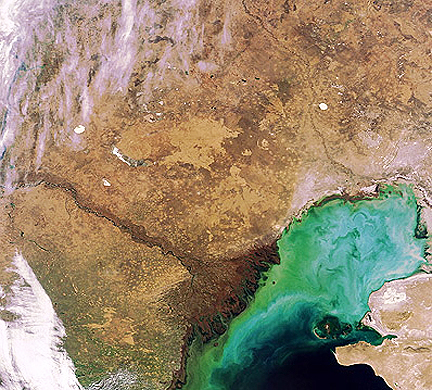 This image is one of the first acquired by Envisat's Medium Resolution Imaging Spectrometer (MERIS) instrument (27 October 2010 around 7:30 UTC), just a few hours after the Earth-observing satellite reached its new orbit. The image features the Volga delta in Russia and Kazakhstan and the northern Caspian Sea. Preliminary checks indicate the instrument is delivering the same high-quality data as it did before the satellite's orbit was lowered from 800 km to 783 km, beginning on 22 October. The size of the image is about 800 by 700 km. Credits: ESA
In order for the satellite to stay operational another three years, engineers from ESA’s European Space Research and Technology Centre (ESTEC) in Noordwijk, The Netherlands, came up with a plan to minimize fuel use by moving it to a lower orbit so it would no longer have to correct for the gradual change in orbit inclination during this period. The Envisat orbit change project, called 'Envisat 2010+', to lower it from about 800 km to about 783 km, began on the morning of October 22 . The 8000-kg satellite was lowered by about 10 km with two 28-minute repositioning moves. Following another two manoeuvres on the evening of October 26, the satellite was lowered an additional 7 km, reaching its new final altitude. Envisat’s instruments were slowly switched back on starting on October 27 , and the satellite is now gradually resuming its normal activities.

Users will start receiving Envisat data and products again on November 2. A mini-commissioning phase is scheduled for November and December. Many different teams will verify the quality of the 'new' Envisat data of more than 100 measurements about our planet, including sea-surface temperature, vegetation indices and greenhouse gas concentrations. Envisat 2010+ is an ambitious project with teams from three ESA establishments – ESTEC, the European Space Operations Centre (ESOC) in Darmstadt, Germany, and the Earth observation centre (ESRIN) in Frascati, Italy — working round the clock to ensure minimal disruptions for the satellite’s numerous operational and scientific data users.