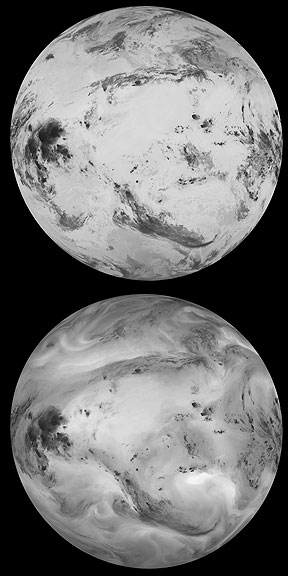 The last Meteosat-6 image, taken on April 4, 2011 — top image is IR, bottom image is WV
[SatNews] After more than 17 years of service, Meteosat-6 — the longest operating Meteosat First Generation satellite — was moved to a graveyard orbit on April 15, 2011.

Meteosat-6 was launched on November 20, 1993, from Kourou, French Guiana. Its main onboard instrument is the Meteosat Visible and InfraRed Imager (MVIRI) with three spectral bands, which enabled it to fulfil its primary task of mapping the distribution of clouds and water vapour from geostationary orbit. Originally designed for a 5-year operational lifespan, Meteosat-6 has surpassed all expectations and has become the record holder for the longest operating Meteosat satellite by providing meteorological data for more than 17 years.

Meteosat-6's fuel was almost depleted, signalling the end of the satellite's operational life and the necessity for a re-orbit — a process that involves moving it further away from the Earth and out of the way of other satellites in geostationary orbit. The move to a graveyard orbit also serves as means to lower the probability of collisions with operational spacecraft and thereby help prevent the generation of space debris.

Milan Klinc, Spacecraft and Flight Dynamics Engineer said, "One of the most important periods for Meteosat-6 was between September 2001 and January 2007 when it was the first Meteosat satellite to provide a rapid scanning service over Europe, delivering more frequent data over a smaller region. The service was a success with the user community as for the first time it meant that image data covering the European region could be provided every 10 minutes. The Meteosat-6 Rapid Scanning Service (RSS) also played a significant role in preparing the user community for Meteosat Second Generation (MSG) services, by offering higher frequency data over Europe. Meteosat-6 also served as backup to Meteosat-8 (MSG-1) for severe weather monitoring over Europe, until the launch of MSG-2 in December 2005. The re-orbiting process involved moving the satellite approximately 380 km higher than its current position, after which the rotation speed of Meteosat-6 was reduced and all energy sources on board were removed by dumping the remaining fuel, discharging the batteries and venting out the pressurant gas in the fuel tanks in order to fulfil the international rules on space debris mitigation."