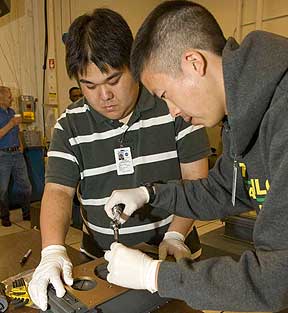 Roland Coelho and Alex Chin, students at California Polytechnic State University in San Luis Obispo, Calif., bolt an adapter plate to the bottom of the Poly Picosatellite Orbital Deployer (P-POD) to prepare the spacecraft for NanoSail-D vibration testing at Marshall Space Flight Center in Huntsville, Ala. NanoSail-D is snugly housed in the P-POD, a commercially available satellite deployer designed by Cal Poly. The satellite will be ejected into space by the P-POD shortly after it reaches orbit.

[SatNews] "Only Pete Worden would do something like that"...

The NASA Ames Research Center is known for establishing innovative partnerships and Pete Worden, the former Air Force general who serves as the center’s director, is known as a maverick. Still, the latest joint venture to come to light has caught even some longtime NASA observers by surprise.

Under supervision from NASA Ames, inmates working in the machine shop at California’s San Quentin State Prison are building Poly Picosatellite Orbital Deployers (PPODs), the standard mechanism used to mount tiny satellites called cubesats on a variety of launch vehicles and then, at the appropriate time, fling them into orbit.

"Only Pete Worden would do something like that," said Bob Twiggs, who was one of the inventors of the cubesat while he was a professor at Stanford University. "He is a real independent hero to me in blazing new trails rather that sticking close to the safe road," Twiggs, who now serves as a professor at Kentucky’s Morehead State University, said by email. This article can be accessed here at CorrectionsOne.com.