GIOVE-A, the first test satellite for Europe's Galileo navigation system, is to remain in service for a further 12 months. 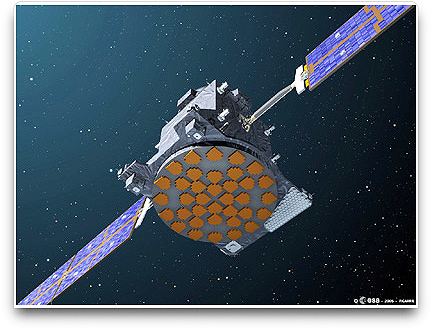 The satellite, already in orbit for 41 months — 14 months beyond its original mission design life — will continue to provide critical data to all of the ground users experimenting with Galileo navigation signals. The European Space Agency (ESA) recently approved an extension of the GIOVE-A mission for a further twelve months, which provides for operations to be supported to the end of March 2010. GIOVE-A carries radiation monitoring instruments which gather invaluable data which is processed and analysed to assist experts characterise the environment in the Galileo orbit, one of the primary objectives of the GIOVE missions.

During routine maintenance on April 28th, an anomaly was discovered onboard GIOVE-A, which required payload transmissions to be temporarily switched off. Full operations were returned on May 27th, with the broadcast of L1-E5 navigation signals, and there has been no impact on the ability of GIOVE-A to continue supporting payload operations. Launched on December 28th, 2005, GIOVE-A was designed and built by SSTL within a 30-month, 28M Euro contract. The 600kg satellite had four mission objectives: All of these objectives have now been achieved. SSTL also played a significant role in the in-orbit testing of the second Galileo satellite, GIOVE-B, launched in 2007. Recently, SSTL teamed with OHB-Systems of Bremen, Germany to submit a proposal to ESA for the provision of fully operational Galileo satellites to be launched before 2013.