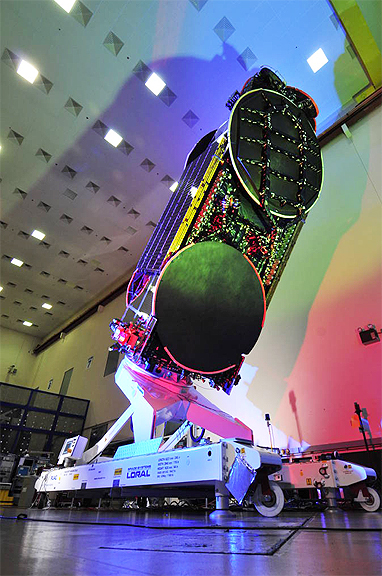 Photo of ViaSat-1 courtesy of SS/L
[SatNews] Another feat for SS/L as their latest satellite is handling post-launch maneuvers with aplomb.

Space Systems/Loral (SS/L) (NASDAQ: LORL) has announced that the ViaSat-1 broadband satellite, built for ViaSat Inc., is performing post-launch maneuvers according to plan. The satellite was successfully launched yesterday from the Baikonur Space Center in Kazakhstan aboard a Proton Breeze M launch vehicle provided by International Launch Services (ILS). The satellite deployed its solar arrays early this morning according to schedule, and tomorrow it will begin firing its main thruster to maneuver into geostationary orbit. "The successful launch of ViaSat-1 is the culmination of well over one and a half million labor hours of hard work," said John Celli, president of Space Systems/Loral. "With four decades of experience building broadband and Ka-band satellites, Space Systems/Loral has been pleased to play a role in another important next step in the evolution of satellite broadband."

ViaSat-1 is an all Ka-band, high-throughput broadband satellite that is designed to provide more than 140 gigabits per second throughput, mostly for use in the West Coast of the U.S. and in the Eastern half of the U.S. The satellite will be positioned at 115.1 degrees West. It has 72 spot beams, with 63 in the U.S. and nine over Canada. The Canadian beams are owned by satellite operator Telesat and will be used for the Xplornet broadband service to consumers in rural Canada. ViaSat-1 is based on SS/L's highly reliable 1300 space-proven platform, which has the scale to support the large amount of spot beams, equipment and thermal dissipation required by high throughput satellites. The spacecraft is designed to deliver service for 15 years or more. With this launch, there are 66 SS/L-built 1300 satellites currently on orbit.