Pure Paradise When You Extend Your Satellite's Sphere Of Influence

Paradise Datacom recently announced the release of PCMA-70 following the completion of a partnership with ViaSat to gain access to their patented Paired Carrier Multiple Access (PCMA) bandwidth-saving technology.

By combining uplink and downlink transmissions into the same transponder bandwidth, this technology can provide up to 50 percent reduction in the satellite space segment required to support the link. Supported applications include point-to-point as well as point-to-multipoint system topologies. In conjunction with this announcement, Paradise Datacom released a most informative Application Note, from which we excerpt the first page...

Paradise Datacom’s PCMA-70 BANDWIDTH EXTENDER is designed to provide satellite-based system operators with a way to greatly increase their utilization-efficiency of transponder spectrum to reduce operating costs. The degree of savings depends on a number of factors including satellite performance and link design as it relates to the transponder power and bandwidth required to accommodate the traffic. System design considerations are expressed later in the document, which may be downloaded in ".pdf" format at this direct link.

PCMA-70 uses Paired Carrier Multiple Access (PCMA), a patented technology developed by ViaSat. PCMA uses an adaptive, self-interference cancellation technique to allow transmit and receive carriers of a duplex link to be superimposed on to one another to achieve space segment savings of up to 50 percent (see Figure 1 below). With the PCMA-70 installed in the modem’s IF loop, a sample of the transmit signal is routed to the cancellation circuits where it is modified to emulate propagation effects and then used to eliminate the transmit carrier signature from the composite local + distant signals being received from the satellite. 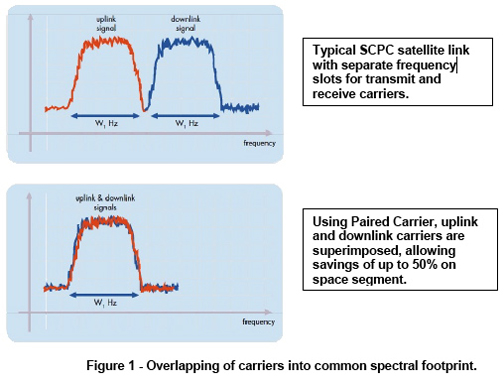