Iran... Posing A Credible Threat To The U.S. Navy (Missile)

[SatNews] Iran has demonstrated a new type of short-range ballistic missile (SRBM) based on the Fatah 110 platform, capable of hitting targets at a range of up to 250-300 km with high precision. 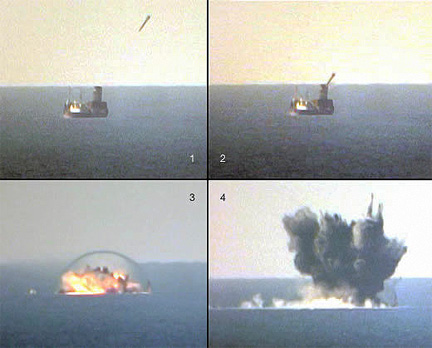 Iran has demonstrated its capability to hit a floating target with precision guided, short range ballistic missile of the Fatah 110 (M-600) class. Photo: FARS news agency
During an operational demonstration the missile was fired at a target vessel floating in the Persian Gulf, scoring a direct hit. Accordingly, the new missile was named ‘Persian Gulf (Khalij Fars). The missile apparently uses mid-course inertial guidance (INS) and an electro-optical homing seeker to achieve terminal attack precision. Previous versions of the Fateh 110 (also designated M-600 in Syrian use) used a tipped nose, while the current model has a rounded nose presumably housing the guidance kit. As the new version demonstrated in this test, the accuracy of the new missile is far better than the 0.3 percent of the range, attributed for the earlier model of Fateh 110 which relied only on inertial guidance. This type of solid-rocket propelled missile can carry a 450 kg warhead.

The new missile was endorsed by the commander of the Islamic Revolution Guards Corps (IRGC), Major General Mohammad Ali Jafari. He also announced that the IRGC has completed the development of a long-range, passive radar covering a 1,100km-radius. The new radar is intended to provide effective detection of surface naval targets. According to western analysts, Iran’s Fateh 110 is based on the Chinese DF-11A SRBM. However, the Chinese missile has not been reported to have anti-ship capabilities.

With Iran possessing such capabilities, the implications for the U.S. Navy are serious. The combination of passive targeting system with the precision demonstrated by the new Iranian missile means that Iran could potentially track U.S. Navy carrier groups at long distances, when they operate in the Arabian Sea, at relatively long distances from their coastline. With this data the Iranians could try to target the US carriers without early warning. It also means that the U.S. Navy cannot consider presence at the Arabian Gulf as safe, until AEGIS destroyers demonstrate their capability to effectively engage and eliminate guided ballistic missile threats such as the ones demonstrated by Iran.