The aviation industry is rapidly increasing its digitization and connectivity efforts to improve passenger experience as well as to lower the cost of operation — GateHouse Telecom has now developed new technology customized for airborne GX solutions that has pulled testing new applications down to Earth. 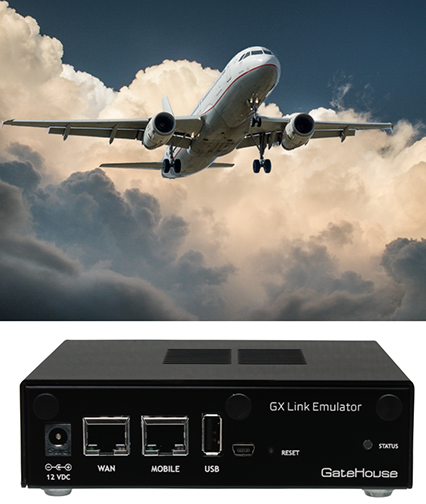 Today, on-air SATCOM solution testing and demonstration is the most common way for developers to assess satellite communications solutions and applications. Thorough testing and testing of corner cases can be both expensive and time-consuming if not altogether impossible.

Many are counting on the Inmarsat Global Xpress network to gain the competitive edge. However, testing new GX applications, as with any other SATCOM enabled application, for that matter, usually requires an airplane at your disposal, and you still cannot control conditions.

However, a new product now makes it possible to perform testing of GX solutions on the ground, saving time and money while allowing developers to expose applications to a far wider range of scenarios than what is possible to reproduce during a flight. The Danish SATCOM company, GateHouse Telecom, has applied new features to the company’s flagship product, the Global Xpress Link Emulator (GLE), which are specifically targeted the challenges characterizing the aviation industry. With the GLE, testing is not only brought down to earth, but also indoors, as line-of-sight is not needed.

Svend Holme Sørensen, Product Manager at GateHouse Telecom, said that when performing on-air testing for aircraft-applications, you must bring a terminal and antenna with you onboard the airplane and you must maintain line of sight to the satellite throughout the test. Furthermore, you cannot control weather conditions and expose your application to rough weather, such as thunder and rain. With the company's new aero features, developers can emulate a flight trip and expose their solution to different challenges that may occur during a voyage. This enables an efficient way to test and document solutions response to common distortions. The new GLE features are also a valuable tool for sales situations. Developers and re-sellers can set up and demonstrate their applications to potential customers indoors, e.g., at trade shows and conferences. All they need is the GLE, a laptop, internet connection and cables. Additionally, the GLE allows developers to regulate bandwidth automatically by fading profiles, which can be adjusted by fade-in and out to a given level or programmed prior to testing, to fade over time at a given average level, standard deviation and rate of change. It all depends on the parameters the user wants to test.

The GLE is an off-air test tool that emulates a Ka-band connection with realistic bandwidth and latency. It is already used by leaders in the global SATCOM market, such as Honeywell, VT iDirect and Inmarsat. Gatehouse has now built upon the GLE technology and applied new features designed specifically for developers servicing the aviation industry. Satellite switching and handover imitates satellite switch, which is of course necessary for fast-moving applications such as GX solutions on airplanes.

Connectivity is a must-have for most airlines today. 82 carriers now offer inflight WiFi, which is a 17 percent increase since last year, according to the 2018 WiFi Report by Routehappy. Airlines across the globe are building their connectivity and are making considerable investments in GX solutions to enhance the passenger experience. The German carrier, Deutsche Lufthansa Group, was among the first to secure a GX powered end-to-end connectivity solution that enhances the passenger experience and brand value. Their visionary approach has placed them among the world’s leading digital airlines.

With the new features, the GLE can also manipulate SNR levels to emulate poor bandwidth caused by bad weather conditions or excessive use, with Sørensen adding that the new features make the GLE more flexible and able to fully emulate any situation an application might experience when used on an airplane. With the GLE you can interface to a Network Service Device (NSD), so developers can imitate a scenario that force the application to switch between GX and BGAN. This mode can be used to test the NSD, but also all applications attached to it.

Last, but not least, an open API provides developers and testers with a programmable interface for automating test setup, execution, monitoring and extract of test results. Even though the new features are primarily built for developers servicing the aviation industry, they can also be used to test other software solutions, such as applications made for developers and users that are exposed to rough weather conditions, for instance maritime operators or Southeast Asia during the monsoon season.

The new GLE features include...