India’s Lunar Mission Finds Evidence of Water On the Moon 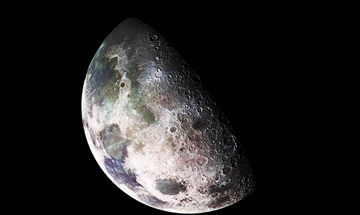 Dreams of establishing a manned Moon base could become reality within two decades after India’s first lunar mission found evidence of large quantities of water on its surface.

Data from Chandrayaan-1 also suggests that water is still being formed on the Moon. Scientists said the breakthrough — to be announced by Nasa at a press conference today — would change the face of lunar exploration.

The discovery is a significant boost for India in its space race against China. Dr. Mylswamy Annadurai, the mission’s project director at the Indian Space Research Organization in Bangalore, said: “It’s very satisfying.”

The search for water was one of the mission’s main objectives, but it was a surprise nonetheless, scientists said.The unmanned craft was equipped with Nasa’s Moon Mineralogy Mapper, designed specifically to search for water by picking up the electromagnetic radiation emitted by minerals. The M3 also made the unexpected discovery that water may still be forming on the surface of the Moon, according to scientists familiar with the mission.

It’s very satisfying,” said Dr Mylswamy Annadurai, the project director of Chandrayaan-1 at the Indian Space Research Organisation (ISRO) in Bangalore. “This was one of the main objectives of Chandrayaan-1, to find evidence of water on the Moon,” he told The Times.

Dr. Annadurai would not provide any further details before a news conference at Nasa today from Dr Carle Pieters, a planetary geologist of Brown University who oversaw the M3.

Dr. Pieters has not spoken about her results so far and was not available for comment last night, according to colleagues at Brown University. But her results are expected to cause a sensation, and to set the agenda for lunar exploration in the next decade.

They will also provide a significant boost for India as it tries to catch up with China in what many see as a 21st-century space race. “This will create a considerable stir. It was wholly unexpected,” said one scientist also involved in Chandrayaan-1. “People thought that Chandrayaan was just lagging behind the rest but the science that’s coming out, it’s going to be agenda-setting.”

Scientists have long hoped that astronauts could be based on the Moon and use water found there to drink, extract oxygen to breathe and use hydrogen as fuel.

Several studies havesuggested that there could be ice in the craters around the Moon’s poles, but scientists have been unable to confirm the suspicions.

The M3, an imaging spectrometer, was designed to search for water by detecting the electromagnetic radiation given off by different minerals on and just below the surface of the Moon. Unlike previous lunar spectrometers, it was sensitive enough to detect the presence of small amounts of water.

M3 was one of two Nasa instruments among 11 pieces of equipment from around the world on Chandrayaan-1, which was launched into orbit around the Moon in October last year. ISRO lost control of Chandrayaan-1 last month, and aborted the mission ahead of schedule, but not before M3 and the other instruments had beamed data back to Earth.

Another lunar scientist familiar with the findings said: “This is the most exciting breakthrough in at least a decade. And it will probably change the face of lunar exploration for the next decade.”

Scientists are eagerly awaiting the results of two American unmanned lunar missions, which were both launched in June, that could also prove the existence of water on the Moon.

Early results from Nasa’s Lunar Reconnaissance Orbiter (LRO) recorded temperatures as low as -238C (minus 396.4F) in polar craters on the Moon, according to the journal Nature. That makes them the coldest recorded spots in the solar system, even colder than the surface of Pluto, and could mean that ice has been trapped for billions of years, the journal said. The LRO has also detected an abundance of hydrogen, thought to be a key indicator of ice, at the poles.

The other Nasa mission, the Lunar Crater Observation and Sensing Satellite (LCROSS), is due to crash a probe into a polar crater on October 9 in the hope of sending up a plume of ice that can be examined by telescope.

“We are on the verge of a renaissance in our thinking about the poles of the Moon, including how water ice gets there,” Anthony Colaprete, principal investigator for LCROSS, said in Nature.

Jeremy Page in Delhi See the article at