The NASA Nod For FASTSAT

NASA has partnered with Dynetics and the Von Braun Center for Science and Innovation, or VCSI, both in Huntsville, Alabama, to successfully complete environmental testing of the Fast, Affordable Science and Technology Satellite, or FASTSAT- HSV01. FASTSAT-HSV01 is a unique platform that can carry multiple small instruments or experiments to low-Earth orbit on a wide range of expendable launch vehicles for a fraction of the cost traditionally required for such missions. The satellite or "bus" will carry six small payloads, including three technology demonstration experiments and three atmospheric research instruments. 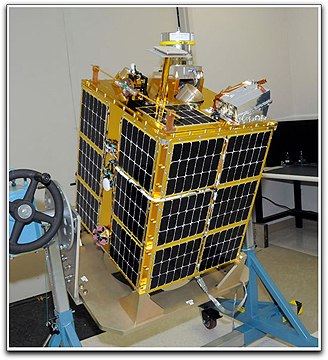 The recent environmental tests will ensure before actual flight that the satellite can withstand the rigors of liftoff and the extreme thermal conditions of space. In the past month, engineers at the Marshall Center subjected the spacecraft to the vibration levels of launch, electromagnetic emissions and thermal vacuum conditions of space. Nanosail D — a technology experiment to demonstrate deployment of a compact solar sail boom system from FASTSAT — will be the first solar sail deployed demonstrating FASTSAT's ability to launch a nanosatellite into space. Nanosail D was built and is managed at the Marshall Center with support from NASA's Ames Research Center in Moffett Field, California. The other two technology experiments include the Threat Detection System and the Miniature Star Tracker, both managed by the Air Force Research Lab at Kirtland Air Force Base, N.M.

In addition, the spacecraft carries three atmospheric instruments built at NASA's Goddard Space Flight Center in Greenbelt, Md., in partnership with the U.S. Naval Academy in Annapolis, Maryland. The instruments include the Thermosphere Temperature Imager, designed to measure spacecraft drag and other flight characteristics; the MINI-ME, a low-energy neutral atom imager that will detect neutral atoms formed in the plasma population of the Earth's outer atmosphere to improve global space weather prediction; and the Plasma and Impedence Spectrum Analyzer, a device that will test a new measurement technique for the type and density of thermal electrons in the ionosphere, which  can interfere with radio-based communications and navigation.