Direct link to the company's infosite.

[SatNews] Alphasat has now reached its operational in-orbit position and has successfully completed all in-orbit tests.

Built for Inmarsat, the leading provider of global mobile satellite communications services, Alphasat carries a new generation of advanced geomobile communications payload in L-band, developed by Astrium in the UK with investment support from the Technology Strategy Board and the UK Space Agency. This payload will augment Inmarsat's existing broadband network service across Europe, Africa and the Middle East, providing new capabilities in terms of performance and resource availability. It also delivers additional L-band space segment redundancy and consolidates safety of life services for the aeronautical and maritime sectors. 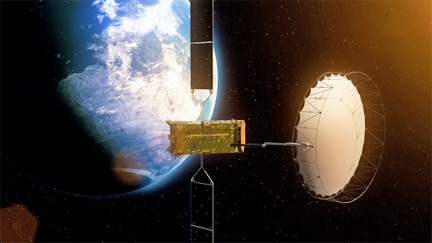 Artistic rendition of the Alphasat in orbit.

This advanced payload features eight new generation digital signal processors, which are able to efficiently manage multiple communications with maximum flexibility in both frequency and beam power allocation, and an 11-metre antenna reflector.

Alphasat, designed and built by Astrium, is also the first flight model of the new high capacity European satellite platform Alphabus which has been jointly developed by Astrium and Thales Alenia Space with ESA and CNES (French Space Agency) support, to address the upper range of the communications satellite market. The Alphabus platform is the most powerful platform on the market, capable of conducting missions with a satellite launch mass of up to 8,800kg, a payload power of up to 22kW and a payload mass up to 2,000kg.

After its successful launch by Ariane 5 on July 25, 2013, Alphasat's Launch and Early Orbit Phase (LEOP) operations were conducted from the Astrium spacecraft control centre in Toulouse. The satellite reached its testing position in geostationary orbit on 31 July, where it fully deployed its solar arrays and its deployable reflector. Testing of the satellite platform went smoothly and Astrium handed over control of the satellite to Inmarsat on August 12.

Since then, Inmarsat has conducted intensive payload testing in orbit, supported by Astrium engineers. Alphasat reached its operational position in October, where ESA's technology demonstrator payloads have also been tested. Inmarsat has begun the migration of Global Satellite Phone Service (GSPS) to Alphasat. Migration of other services is scheduled to be completed by the middle of 2014.

Alphasat, designed for a 15-year in-orbit lifetime, had a launch mass of 6,650kg, with a deployed solar array wingspan of 40 meters.