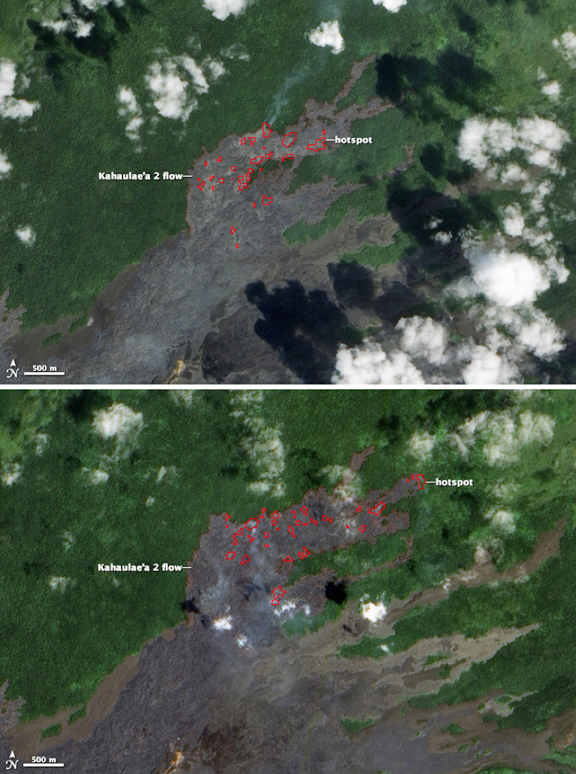 [SatNews] While most lava from the Pu’u ’O’o crater on Kilauea has flowed south towards the coast over the years, the most recent flow—Kahauale’a 2—is pushing northeast into ohia lehua forests in Hawaii’s interior.

The Advanced Land Imager (ALI) on NASA’s Earth-Observing 1 (EO-1) captured these images of Kahauale’a 2 on February 2 and March 11, 2014. The red outlines represent hotspots ALI detected by observing shortwave infrared light. Active flow features known as breakouts are present in many of the hotspots. Rocky lava flows appear black. Clouds are white. The reddish-brown areas along the edges of the lava flow are scorched forests.

Kahauale’a 2 is moving slowly, having only advanced by about 600 meters (2,000 feet) since November 2013. The halting advance is the result of cyclical changes in pressure about one kilometer beneath the surface that cause Kilauea’s summit and the Pu’u ’O’o’s vent to suddenly deflate and inflate over periods of a few days. When the summit deflates, the volume of lava flowing from Pu’u ’O’o decreases and the flow front stops moving forward. When the summit inflates, lava surges from Pu’u ’O’o, forming breakouts. However, the breakouts often appear well behind the stalled flow front, and it can take some time before they begin pushing the front forward.

While Kahauale’a 2 poses no immediate risk to human settlements, it could eventually encroach on communities to the northeast if it continues on its current path. In the past, lava from Pu’u ’O’o destroyed several communities, including the Royal Gardens subdivision, along the south coast of Hawaii.