[SatNews] The General Services Administration (GSA) has released a final request for proposals for a procurement that civilian and defense agencies can use to purchase commercial satellite communications. The RFP is for an indefinite delivery-indefinite quantity contract to provide end-to-end satellite services known as Custom Satcom Solutions, or CS2, which is part of the Future Comsatcom Services Acquisitions program, an agreement with the Defense Information Systems Agency that allows GSA to manage the purchase of satellite services for all federal agencies, including the Defense Department.

Officials expect that by combining GSA's and DISA's buys for satellite communications, they will eliminate redundant acquisition costs and establish a common marketplace through which vendors can offer services, said Kevin Gallo, GSA's project manager for Future Comsatcom Services Acquisitions. GSA estimates the program will generate about $5 billion in sales during a 10-year period, but fiscal 2009 sales on the three contracts that are being combined suggest the program will exceed that total, Gallo said. FCSA means one less contract that vendors, GSA and Defense have to manage on behalf of their customers, said Ray Bjorklund, senior vice president and chief knowledge officer at the market research firm FedSources Inc. in McLean, Virginia. He added, however, there still will be unique military requirements that commercial satellite providers can't handle directly, a concern the RFP doesn't address. 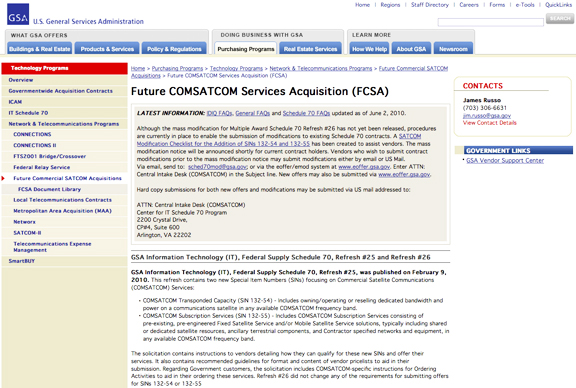 One benefit of the new contract is it is designed to handle contingency requirements in emergency situations, Bjorklund said. In many cases, agencies don't own the technologies required for satellite communications in an emergency, so the contractor is responsible for engineering and deploying solutions quickly, sometimes in a matter of hours. This could require, however, a sophisticated group of contractors working together as a team to accommodate the needs, which could be provocative, he said. Future Comsatcom Services Acquisitions will replace DISA's Inmarsat Airtime and Equipment contract, the Defense Information System Network Satellite Transmission Service-Global pact, and GSA's Satcom II program. DSTS-G has a bridge contract that extends to 2013, and the others expire in 2012. Gallo said he expects task orders for FCSA to come out later this year. In February, GSA issued its FCSA Schedule 70 refreshes, which also are open to state and local governments. Proposals are due August 12th. (Source: nextgov, Emily Long)